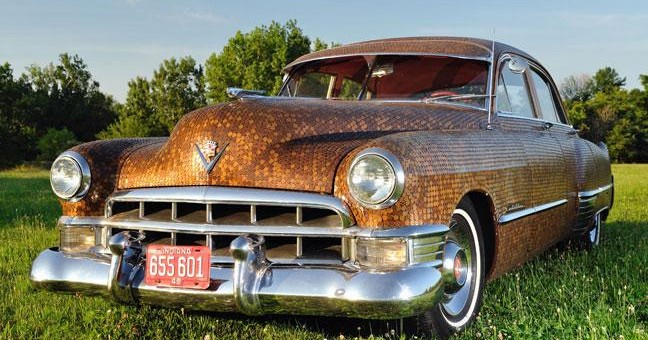 The majority of people will go to their local body shop if they need a new paintjob for their classic car, but when Larry and Theresa Thompson’s 1949 Cadillac Series 62 needed a refinish, the couple had to call the US Mint.

That’s because the Thompson’s Caddy is covered in over 38,000 pennies, or $382.95 worth. The pennies were glued on by the Thompson’s and their two children and took the family over six weeks to complete. In total, it added almost 200 lbs in weight to the car.

Originally, the Thompson’s acquired the pennies by raiding their penny jars and but eventually called on the help of their friends to acquire pennies before contacting the mint. Upon the car’s completion, the family has consistently used it on the weekends and in the summer and has displayed it at multiple shows.

“We saw an advertisement for a 1949 Cadillac Series 62 and decided it couldn’t hurt to take a look,” said Theresa. “Once we had brushed the snow off and discovered she was already the colour of an old penny, we decided it was fate.”

The look of the car may not be for everyone, but Theresa says she’d love for the original owner to see the car now.

“I like to think we helped to fulfil her destiny – I’d love to know how the original owner feels about what we did with her. I tried locating him but discovered he’d passed away shortly before we purchased her,” said Theresa. “Not long ago we crossed paths with one of his grandsons at a car show who said his grandfather would have loved the car.”