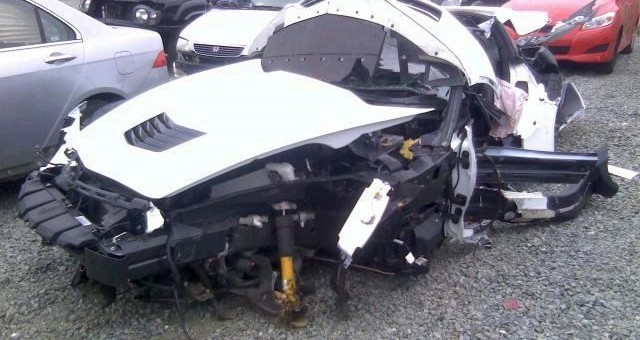 Since the car went on sale last year, we’ve see no shortage of C7 Corvette crashes. With the way the seventh-generation ‘Vette is selling, it shouldn’t be news that more than a handful have and will be crashed. This wreck though, found by LSXTV on Insurance Auto Auctions, really caught our eye.

The Arctic White Corvette, pictured in a Northern Virginia scrapyard, is now barely recognizable as the well-known and iconic sports car. IAA describes the damage as being “all over” and they mean it. The entire front end is destroyed including the suspension, both doors appear to have fallen off, the rear hatch is separated from the body and the entire rear fascia is ripped off. Despite all this, both airbags are intact.

Hopefully all the occupants involved in this crash made it out okay, but judging from the aftermath, that was one nasty wreck. IAA hasn’t put the car up for sale yet and we can’t see why anyone would want it, as not even the LT1 V8 engine looks salvageable. Check out the listing here for more photos and remember, drive safe.