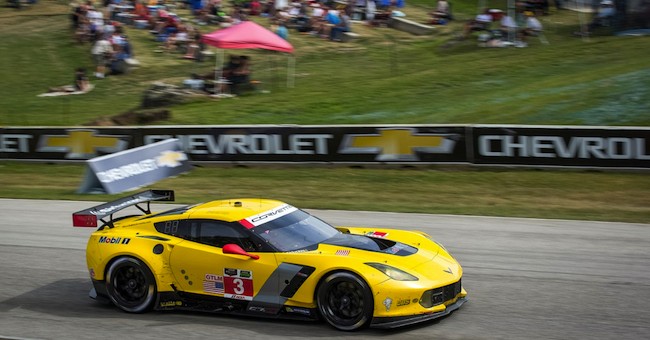 Corvette Racing ventured out to the historic Virginia International Raceway this weekend for the Oak Tree Grand Prix, the ninth race of the season in the Tudor United SportsCar Championship. During qualifying yesterday, the No. 3 Corvette C7.R locked in a time of 1:44.105 in the hands of Antonio Garcia, enough to put the C7.R in sixth position on the starting grid for today’s race. Tommy Milner and Oliver Gavin will start ninth in the No. 4 car after posting a fastest time of 1:44.812.

The team’s roster will look a little different today after Jan Magnussen was involved in a multi-car crash during a practice session yesterday and experienced “concussion-like” symptoms, Chevrolet said. As a result, Corvette Racing will sub in Wayne Taylor Racing’s Jordan Taylor, who also participated in the team’s Le Mans effort this year.

“The number one priority at Corvette Racing is the safety of our drivers,” said Doug Fehan, Corvette Racing Program Manager. “The Corvette C7.R’s driver’s side crash box – a safety element that goes beyond what is mandated in the GTLM regulations – was designed to limit the force of impact in the case of an accident. In Jan’s case, the structure did its job and likely prevented a more substantial injury.”

Garcia described the multiple factors which make VIR difficult track to race on and highlighted why you don’t want to go off the track, like Magnussen did.

“You need to have good braking and traction performance at VIR. The corners do not have as long a radius (as Road America) which means it comes down to how long you can roll through the corners and stay brave enough to keep it on track,” Gavin explained. “VIR is one of those tracks where you don’t want to go off. All the combinations and fast sections are very challenging. You are constantly cornering and always turning. Managing traffic is still important if you have the fastest cars or not.”

You can tune into the race and cheer on Corvette Racing today at 4 p.m. on FOX Sports 1. Apart from the upcoming Lone Star Le Mans race at Circuit of the Americas and Petit Le Mans at Road Atlanta, today will be one of the last times you’ll see the C7.R compete until next year’s race season rolls around.