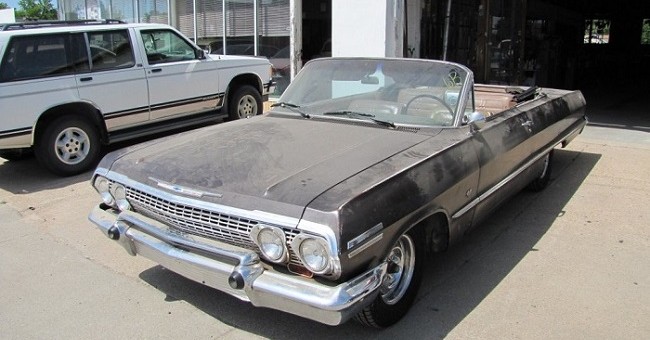 Imagine walking into a now abandoned Chevrolet dealership and discovering it was still sitting exactly how its owners left it, with cars still on the showroom floor and tools still in the service bay. Well, if you can believe it, that is exactly how Bullock Chevrolet in Grant, Nebraska was recently found.

Unlike other dealership finds like this where the vehicles are often brand new, Bullock Chevrolet had no all-new cars with single-digit figures on the odometer. However among the 200 cars found at the dealer, more than a hand full were like-new. In addition to the vehicles there is also a huge amount of spare parts and vintage garage decorations.

Vehicles found include a 1938 Cadillac Model 60 4-Door, a 1925 Buick racer, a 1936 Chevrolet 5-Window Coupe, a 1938 Cadillac 4-door sedan and even some interesting non-GM products such as a 1962 Studebaker Classic 4-door. Also, because the dealership building was used to store some of the Bullock family’s classic cars, several frame-off restored models are being offered including a 1969 Pontiac GTO Judge.

The Bullock collection will be auctioned off on September 6 in Grant, Nebraska. The company auctioning off the cars and parts, Van Der Brink Auctions, put together an in-depth video of them going through the dealership, which you can see below. All parts being sold off can also be viewed here and more information on the auction is available here.