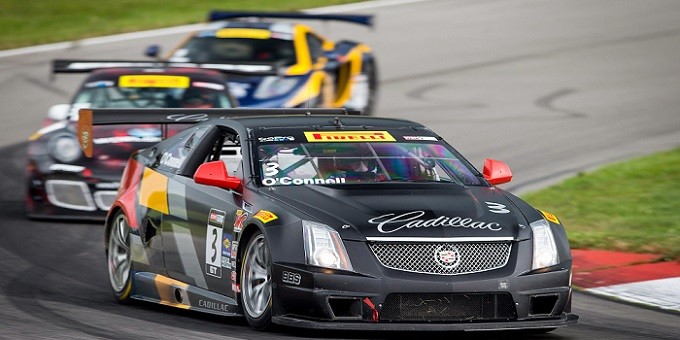 Cadillac Racing felt the disadvantages of their CTS-V.R racecar at the Cadillac Grand Prix of Sonoma today, after finishing the first of two races in the double header event in fifth and eighth place.

Current World Challenge GT class leader Johnny O’Connell started from tenth position after posting a qualifying time of 1:34.341, while Andy Pilgrim started from thirteenth with a qualifying time of 1:34.762. The race start saw O’Connell move up to eighth with Pilgrim also making gains and moving to tenth, but by the time the cars had made a full lap of the 2.3-mile road course, a full course caution was put out.

Upon the restart, O’Connell was battling for position behind the Ferrari 458 of Anthony Lazarro and the Bentley Continental GT3 of Guy Smith when the two hit the oil dry that was laid out during the caution. The two spun out and allowed O’Connell to easily gain another two positions. He eventually moved up another position to fifth, while Pilgrim remained in tenth. Pilgrim was eventually caught by the Audi of James Sofronas and the Ferrari of Mike Hedlund and pushed wide due to tire wear.

“I got a great start going from 13th to 10th,” Pilgrim said post race. “Then we got our, what seems like, mandatory yellow on the first lap. It is a tough deal for us out there now. I lost the tires really bad towards the end and got separated from Johnny. I did the best I could. I didn’t think that Sofronas could come by me from as far back as he was on the track. I didn’t know the Ferrari of Hedlund was right with him. When the tires are gone you are wounded duck and can’t be aggressive and can’t really defend.”

O’Connell also had tire wear problems and found it difficult to hold position throughout the race. He says the CTS-V.R is the heaviest car on the racetrack and was pushed to tis absolute limits to remain competitive in a field filled with GT3-spec cars.

“When you have a race car, a good race car that is 1.3-seconds back any movement forward is good,” O’Connell said. “I drove the Cadillac CTS.V.R as hard I could. I had some good battles on the track. The challenging thing is that we are the heaviest car on the track. With each successive lap I am sliding the car. If there were two more laps I probably would have been seventh or eighth. The two spins in the carrousel by Lazzaro and Smith were a gift. They are top line drivers. This is Guy’s first race on these tires and maybe he wasn’t familiar with the way they heat up. I think Lazzaro got caught out by the speedy dry on the track. Take those two, and the spin by Thorne and we are eighth. We optimized and maximized our Cadillac CTS.V.R today. A team that was winning races at the beginning of the year is now finishing 27 seconds back.”

Pilgrim and Cadillac Racing still hold their first place positions in the GT Driver’s and Manufacturer’s Championship, but with two races left in the season and increasingly an competitive field, it will be a challenge for them to hold onto their lead. Hawk Performance’s Mike Skeen is gaining on them, with 1297 points to O’Connell’s 1308. The second race of the day will go live at 4:40 pm and can be viewed at WorldChallenge.com.