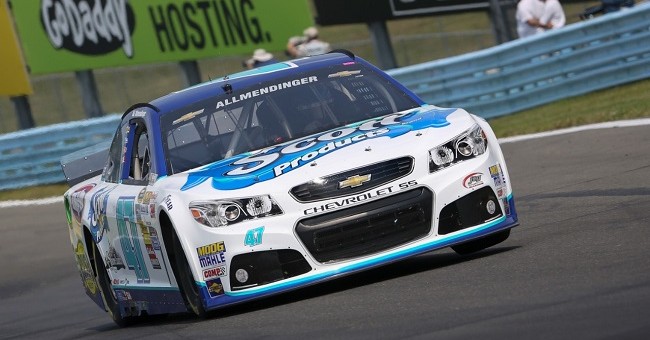 AJ Allmendinger captured the first win of his career on Sunday, driving to victory in the Cheez-It 355 at Watkins Glen.

Jeff Gordon, the race’s pole sitter, led the majority of the race from the start. He and Marcus Ambrose soon pulled away from Kurt Busch in third place, putting more than 10 seconds between them. As Gordon and Ambrose battled for first, Gordon’s car suddenly lost power, bringing out a caution flag. A second caution flag would soon fly for Ryan Newman and Michael McDowell after the two were involved in a wreck.

The crash put the track under a red flag for over an hour. Upon the restart, Allmendinger found himself near the front of the pack. His team believed he would have to stop for fuel before the race’s end, but another caution flag gave the drivers another chance to save fuel. The green flag flew once more with Allmendinger and Ambrose battling it out for first, but another wreck put out a caution flag. Allmendinger would go on to cross the finish line 1.5 seconds before Ambrose.

The happy news of Allmendinger’s first ever win is welcomed with open arms following NASCAR driver Tony Stewart’s incident on Saturday night at Canandaigua Motorsports Park. Stewart ran over and killed Kevin Ward Jr. after the 20-year old approached his moving car to confront him.

“This NASCAR community, as a whole, we’re a family,” Allmendinger said. “When anything like that happens, it’s something you don’t just erase and forget about. … You just try to come together. That’s all you can do.”

The accident was one of many this weekend offering a dark reminder of the dangers of motorsport. The Cheez-It 355 was stopped twice for crashes. The worst saw Newman bounce off the guardrail, shoot across the track and slam into McDowell, sending his car airborne and into a catchfence. Watkins Glen, being a road course, doesn’t have the same safety standards in place as some of the NASCAR ovals.

“The SAFER barrier doesn’t exist here, there are no concrete walls,” Newman said. “It’s just a very antiquated race track and the safety is not at all up to NASCAR’s standards and it’s a shame that we have to have accidents like that to prove it.”

In third on the podium behind Ambrose was Kurt Busch, making for a Chevrolet-dominated podium. Other Team Chevy drivers in the top ten included Kyle Larson in fourth and Kevin Harvick in seventth. Dale Earnhardt Jr is leading overall points standings as NASCAR heads to the Pure Michigan 400 at Michigan Superspeedway on August 17. However he is being trailed closely by Jeff Gordon and Matt Kenseth. Allmendinger’s win moved him into 24th place overall and successfully put him in the Chase for the Sprint Cup.