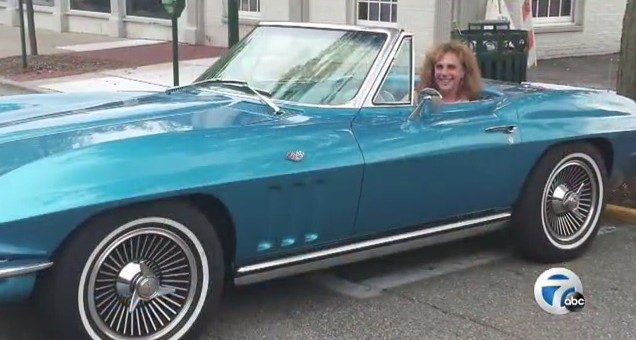 The Woodward Dream Cruise is meant to be a feel-good celebration of everything and all things automotive, but one Rochester Hills couple’s outing to the Dream Cruise ended in tragedy Saturday.

Gordon Ondrisek and his wife Arlene spent all day Saturday cruising the Woodward strip in their 1965 Corvette Stingray, which they have owned for the last 15 years. As the festivities wrapped up, the pair decided they would grab a bite to eat and parked their Corvette outside the Pita Café at the corner of Willits and Old Woodward in downtown Birmingham, Michigan. When Gordon walked out to leave the restaurant, he found his car had been stolen.

“I just worked on it on Wednesday,” Gordon told WXYZ Detroit “I went to a friend’s house and put brakes on it, for somebody.”

The car was Gordon’s passion and consumed much of his time as he worked on it and slowly made improvements to it. He described it as the “perfect car.”

The Ondriseks believe the ’65 Corvette was targeted for its popularity. As there are an abundance of C2 Corvettes at the Dream Cruise and in Michigan, the stolen car could easily go undetected among the frenzy of cars in the vicinity of Woodward.

“I think somebody targeted the mid-year Corvette, which is a very popular car, and my feeling is it’s probably being disassembled somewhere and sold off in pieces,” said Gordon.

Despite the likely event that the car was been disassembled for parts, the Ondrisek’s believe the public can help them find the car. He describes it as being Nassau Blue inside and out with a white convertible top and white wall tires. The first three characters of his Michigan number plate for the car are B-C-H, so if you’re in Michigan, keep an eye out for this fellow gearhead’s stolen ‘Vette.