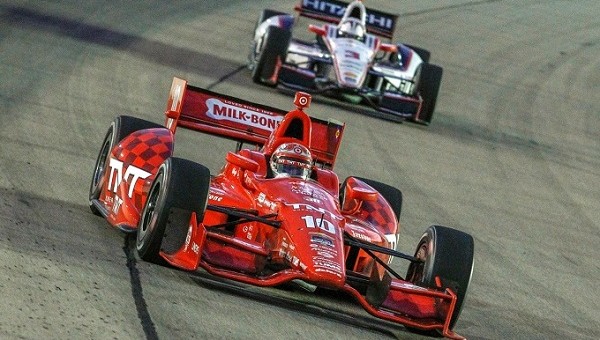 Chip Ganassi Racing’s and Team Chevy’s Tony Kanaan had another difficult race Sunday at the Iown Corn Indy 300 present by DEKALB after leading 247 laps and losing the lead to Ryan Hunter Reay with only 2 laps remaining. Kanaan has led a combined total of 325 laps in the last two IndyCar races at Pocono Raceway and Iowa Speedway, but has been unable to lock in his first win of the season.

Kanaan and his No. 10 Target Chevrolet initially looked unbeatable, but were easily passed by Hunter-Reay after the 2014 Indianapolis 500 winner pitted on lap 284 during a caution, grabbing four fresh tires in the process. Hunter-Reay was the second Honda Kanaan let by before the end of the race. Sarah Fisher Hartman Racing’s Josef Newgarden also squeezed passed him, forcing Kanaan to settle for third place. Behind him was reigning Verizon IndyCar Series champion Scott Dixon in fourth and Ed carpenter in fifth.

IndyCar points leaders Helio Castroneves and Will Power entered the race tied for the overall championship lead, but both drivers struggled throughout and finished eighth and 14th, respectively. The result pushed Castroneves into first in the championship, now 9 points ahead of second place Power.

Team Chevy’s Juan Pablo Montoya, winner of last week’s Iowa Corn 300 at Pocono, wrecked when Ed Carpenter left his racing line and turned in front of him, causing Montoya to lose control and hit the wall with 19 laps remaining.

“I got inside of him and he just – he was running high and all of a sudden, he decides to run low,” Montoya told NBCSN. “He’d been running every lap on the top.”

Montoya was irked upon learning that Verizon IndyCar officials had chosen not to penalize Carpenter, who was apologetic about the incident after the race.

“I feel bad,” said Carpenter. “I certainly wasn’t trying to take him out. I knew he had been working me inside. I was struggling, I was just gonna try the low side that time. I didn’t know he was that far in there.”

IndyCar will leave the oval behind as it heads to Toronto for a double-header weekend at the Honda Indy on July 19 and 20. Dixon, who finished fourth in Iowa on Saturday, won both races of the double header on the streets of Toronto last year and will be looking for his first win of the season at the track next weekend.