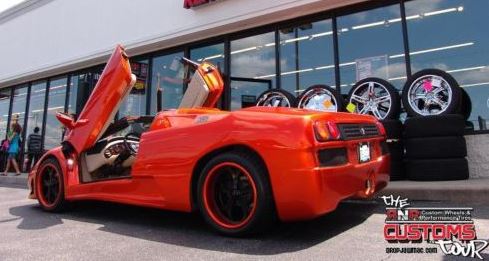 The original 1999 Lamborghini Diablo Roadster was an impressive piece of kit and deservingly so. 5.7L V12, quintessentially Italian looks, sharp performance, and a $287,500 price tag to match. And for most of us, that keeps the supercar firmly on the never-ending “wish list.” However, there is a Diablo Roadster replica has appeared on eBay for a more affordable price.

Based on a 1987 Pontiac Fiero, this Diablo Roadster replica has *most* of the Italian dynamo’s looks, but none of its go. That said, some kudos need to be given here for the attention to detail. The Fiero was stretched 11″ to accommodate the D&R based V.T. Roadster body kit and even manages to have the same wheelbase as an authentic Lambo. Finished in candy orange paint, the vehicle even has matching orange wheels and orange stitching on the inside.

To power the replica, the builder decided to place a 1977 Buick 3800 V6 engine on a 1988 Pontiac Fiero rear cradle. Needless to say, it’s not nearly the same amount of grunt as the genuine V12 in a genuine Diablo. The kit car has a five-speed automatic transmission, which was made to mimic the Diablo Roadster’s gated five-speed manual transmission.

For the asking price of $42,500, this Diablo Roadster replica offers Lamobrghini enthusiasts the ability to own a car that looks somewhat similar to the original. If they’re willing to overlook its General Motors DNA.