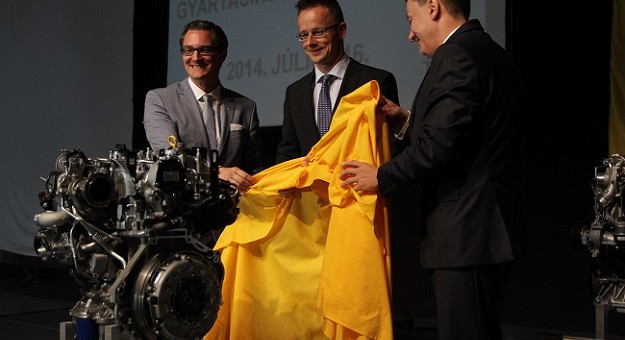 General Motors’ Germany-based subsidiary Opel has announced that the new 1.0-liter, three-cylinder turbocharged engine has begun production at the Szentgotthard Flex plant in Hungary, the newest and most flexible Opel engine plant in the world. Joachim Koschnicke, Opel Vice President of Government Relations and Public Policy and Hungarian Deputy Minister of Foreign Economy, Peter Szijjarto, were both on hand for the ceremonial commencement of production.

“The Szentgotthard Flex plant plays an important role in our product strategy. Between this year and 2018, 27 new Opel models and 17 new engines will hit the market and many of these engine novelties will be built here”, said Koschnicke. “We show very clearly that Opel is back. Opel is on the attack. Our model offensive is in full swing, and engines are a very important part of this offensive.”

With the addition of the new direct-injected 1.0-liter three-cylinder, the Szentgotthard engine plant now builds three different engine families on the same line. Opel invested 700 million Euros to build the plant, which is capable of producing up to 600,000 engines a year, including the new 1.6-liter gasoline turbo, 1.6-liter turbo-diesel and the aforementioned 1.0-liter unit. It is also one of the most flexible automotive manufacturing facilities in the world.

Opel announced the new 1.0-liter turbo engine, which is offered in both 90- and 115-horsepower versions, in August of last year. It is the first member of the GM-Opel small gasoline engine family, which will include other motors spanning 1.0- to 1.4-liters in displacement. The three-cylinder engine will debut in the Opel Adam city car and will eventually make its way under the hood of the all-new Corsa as well.