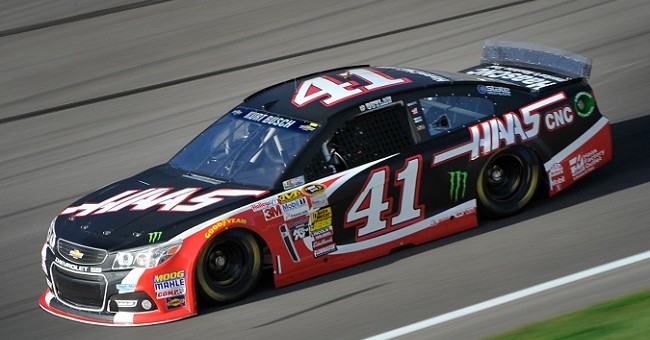 Winning this past weekend’s NASCAR race at Daytona International Speedway was less about how well you could draft your opponent and plan your pit stops and more down to how well you could avoid getting scooped up in a wreck. Aric Amirola proved he was more than able to avoid the ‘Big One’ after winning the rain delayed and shortened Coke Zero 400 Sunday.

Just 19 laps into the race Ricky Stenhouse Jr. broke loose while racing at the front of the grid. Jeff Gordon steered to avoid Stenhouse, but clipped Tony Stewart in the process, sending him into a spin. In turn, 16 cars were caught up in the wreck including usual front runners like Dale Earnhardt Jr., Jimmie Johnson, Kevin Harvick, and Matt Kenseth. Some drivers, including Earnhardt and Danica Patrick, returned to the race with minimal damage while Johnson, Stewart and others retired.

The second ‘Big One’, which the announcers described as “the Huge One”, involved 25 cars. The wreck was started by Biffle and Kahne and ended with Kyle Busch’s No. 18 Toyota upside down. It collected most of the field, with only 7 cars avoiding both crashes entirely.

Team Chevy’s appearance on the podium came from Kurt Busch, who unlike his brother, was able to avoid both wrecks. Busch and his No. 41 Haas Automation Chevrolet SS came in third behind Brian Vickers in the No. 51 Aaron’s Toyota Camry.

The talk of the weekend though was Amirola. Not only did he win his first Sprint Cup victory in 124 starts, he did so in the iconic No 43. car campaigned by Richard Petty Motorsports. The win marked the first time Petty’s No. 43 entered the winner’s circle in 15 years, and it just so happened it was on the same weekend the NASCAR legend celebrated the 30th anniversary of his 200th career win.