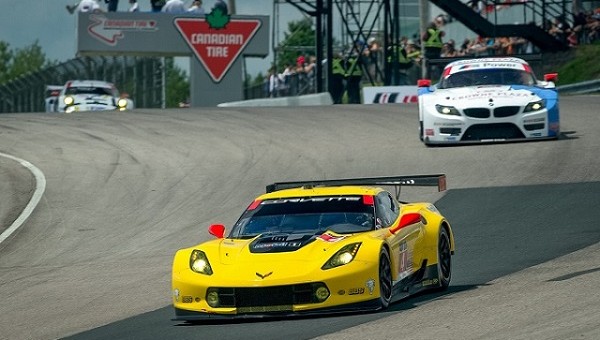 Corvette Racing nabbed its fourth consecutive win in the TUDOR United Sportscar Championship after the No. 3 C7.R driven by Antonio Garcia and Jan Magnussen held off the No. 93 Dodge SRT Viper GTS-R of Jonathan Bomarito and Kuno Wittmer at Canadian Tire Motorsport Park in Bowmanville, ON. Sunday.

The No. 3 Corvette and No. 93 Viper battled for top position all race, but the Viper’s chances were put to an end when Jonathan Edwards’ BMW Z4 GTE forced Wittmer off the track and into the saturated and muddy grass. The car survived the mishap, but the lead was already given to Corvette Racing and the No. 3 car, who now had a 10 second jump on Wittmer.

“Last year and this year it was really close between us and the Viper. During the first stint, we were bumper-to-bumper,” said Garcia. “During the second one, I went out with a little bit of a lead – like three seconds. The most it went was eight seconds because of traffic. So it was really hard. (Before the race) I was expecting safety cars. And I was also counting on them to help save just a tiny bit of tires to have at the end. But everything ran perfect. The Corvette Racing team did a perfect job everywhere, in every single situation.”

Last year’s race winners, Tommy Milner and Oliver Gavin, weren’t as lucky as their teammates in Canada. 30 laps in and sitting in third, Milner was hit and spun by the GTD-class No. 555 AIM Autosport Ferrari 458 in heavy traffic at the exit of Turn 3. Subsequently, Milner and Gavin went on to finish seventh in the GT Le Mans class.

“We came up on two slow guys in GTD cars who didn’t know where they were or what they were doing,” Milner said. “They caused a big pile of cars behind them. There was nowhere for me to go and nowhere for anyone to go. They were kind of two-wide and just blocking the road. I had a little bit of a gap for the two or three GTD cars that were behind me. I got a decent run through Turn 2 and the guy in the Ferrari just came up on the situation; he may have gotten squeezed a little bit by one of the other cars in the group. It obviously wasn’t on purpose but it was a bad situation made by two guys who didn’t know what was going on.”

The win in Canada was enough for Chevrolet to maintain its lead in the GTLM manufacturer championship and for Magnussen and Garcia to hold on to their overall lead in driver’s standings. Corvette Racing is looking to see if they can make it five straight wins when they travel to Indianapolis Motor Speedway for the Brickyard Grand Prix on July 24 and 25.