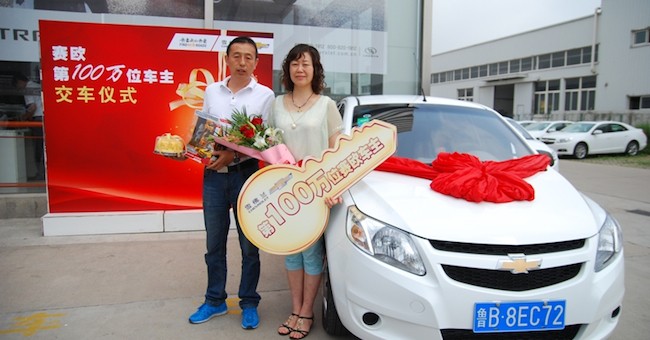 Earlier today we brought you a sneak preview of the new, updated version of Chevrolet’s small Sail sedan, which the automaker sells in India, China and other emerging markets as a budget model. The bowtie brand is hoping the refreshed Sail will provide a small uptick in popularity in India, where sales of the car have recently been tapering off. The Sail is still a hot commodity in China though, where the one-millionth example of the car was recently sold after first being put on the market in the region in 2010.

Tan Zhenwei of Qingdao, China bought the one millionth Sail in the country, a white, 1.2-liter SE EMT model, after seeing it in a Chevrolet showroom.

“It is incredible that a million Sails have been sold. I was attracted to the Sail by its styling, superb safety and fuel efficiency,” Zhenwei said of her new car.

Chevrolet says the Sail, with its spacious interior and economical 1.2-liter and 1.4-liter four cylinder engines, is mostly targeted at young families and first time car buyers. Prices for the car start at an affordable RMB 56,800 in China, roughly equivalent to $9149.49 USD.

The new Sail features a redesigned front fascia, similar to that of the Malibu’s, a new trunklid and taillights and new options such as a sunroof, alloy wheels and fog lamps. A larger, more powerful 110 horsepower 1.5-liter four-cylinder engine is also expected to become available on the new Sail, which may help with its overall appeal in India.