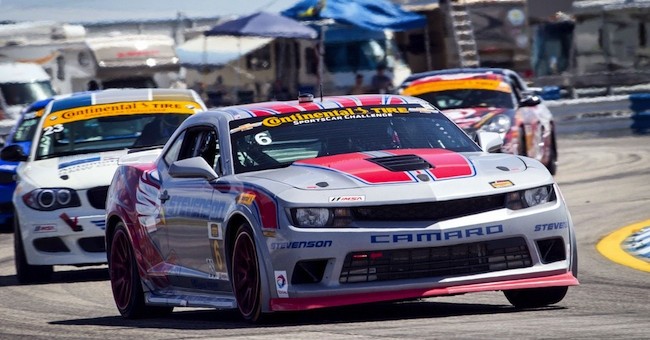 Chevrolet’s new-for-2014 Camaro Z/28.R racked up another win in the IMSA Continental Tire SportsCar Challenge after Andy Lally and co-driver Matt Bell piloted the No. 9 Stevenson Automotive Group Z/28.R to a victory at Canadian Tire Motorsport Park on Saturday.

Bell drove the opening stint, starting at the front of the grid after qualifying third behind Trent Hindman in the No. 46 Trim-Tex BMW M3 and teammates Andrew Davis and Robin Liddell in the No. 6 Stevenson Automotive Group Z/28.R. Just behind Bell on the grid was the third of four Camaro Z/28.Rs racing in IMSA this year, Lawson Aschenbach’s No. 01 CKS Autosport car.

Both Stevenson Z/28.Rs adopted a two-stop pit strategy, with the majority of the field taking on a four-stop strategy. This allowed both cars to hold their positions at the front of the grid throughout the race, but began to work against them when Multimatic Motorsports drivers Ian James and Billy Johnson began to close in in their No. 158 Mustang Boss 302R.

“If there is a driver’s track on the [IMSA] circuit, this is it,” said Lally. “I knew the Mustang would be strong. On the restart, I was just trying to get away and my biggest fear was for them to get to my bumper. We got into lap traffic, and the guys tried to be nice, but we just got to them at the wrong time.”

The Camaro Z/28.Rs of Davis and Aschenbach finished in fifth and sixth, respectively, while the No.2 CKS Autosporyt entry of Ashley McCalmont finished in Seventh.