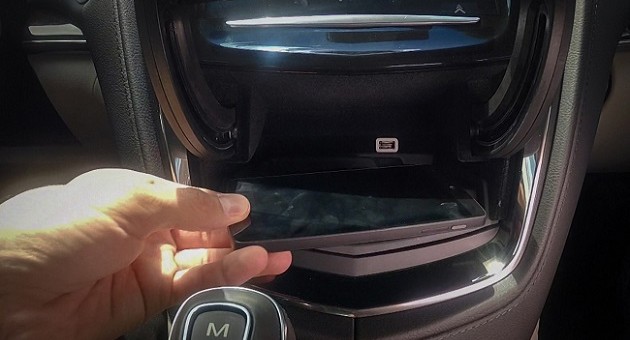 Yesterday it was announced that Cadillac will begin to offer Powermat, a wireless phone charging system, on its vehicles starting with the 2015 Cadillac ATS Coupe and Sedan. The Powermat is located behind the motorized center instrument panel faceplate in the car and allows users to simply place their phone on it to receive a charge – no worrying about whether or not there is a USB port and no fiddling with tangled wires. However Wired has pointed out a small flaw with the advanced system.

No actual phone manufacturers have integrated Powermat charging capabilities into their devices. That means that the only way to use the Powermat in the ATS is to buy a $120 ‘PowerCase’, which also comes with a reserve battery for your cell phone. In response to this, Powermat says wireless charging capabilities are like Wi-Fi, “which was once an accessory but is now built-in and widely available.” So while your phone now may not be Powermat capable, in the future, almost all will.

Cadillac’s charging pad won’t work exclusively with Powermat, either. Another wireless charging system, Qi, is already built into certain Android-based phones and will work with the Powermat in the ATS.

“The language on our site is tilted towards Powermat,” Cadillac rep David Caldwell told Wired. “(But) we wanted to make sure we didn’t lock out other people.”

Powermat will also appear on the redesigned Cadillac CTS and Escalade by the end of the year, so let’s hope some phone companies start to integrate the technology into their products.