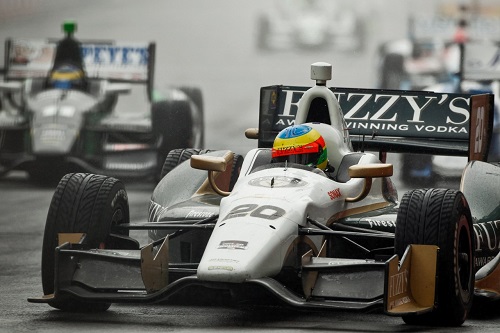 Bourdais, who hadn’t won a race since the last race of the 2007 Champ Car season in Mexico City, started in pole position and led all but seven laps the 11-turn, 2.81-kilometre Exhibition Place track. A crash early in the race caused a long delay, but upon the restart, Bourdais easily held onto his lead. Joining Bourdais on the podium in race 1 was current overall points leader Helio Castroneves and Tony Kanaan.

The rain might have held out for the first race, but drivers wouldn’t be so lucky for the second. Helio Castroneves and Will Power were in a battle for first when they pitted for tires, allowing Conway and others to move to the front of the pack. Conway then spotted a drying track on lap 43 and pitted for slicks well before anyone else. Soon after, a late-race crash which collected Carlos Huertas, Ryan Briscoe, Helio Castroneves, Ryan Hunter-Reay, Carlos Munoz, and Jack Hawsworth put out a red flag, which worked out in Conway’s favor.

Upon the restart, second place Justin Wilson quickly fell down to 10th as he was still on wet tires while most of the field had shifted back to slicks. Behind Conway on the podium was Kanaan, his third consecutive podium finish, and championship contender Will Power. Charlie Kimball crossed the line in fourth, while Takuma Sato earned his best finish of the year in fifth.

The race in Toronto marks the final Indycar race held on a street course for the rest of the season. The series moves to the Honda Indy 200 at Mid Ohio on August 3rd with only 13 points separating first place Castroneves and second place Power.