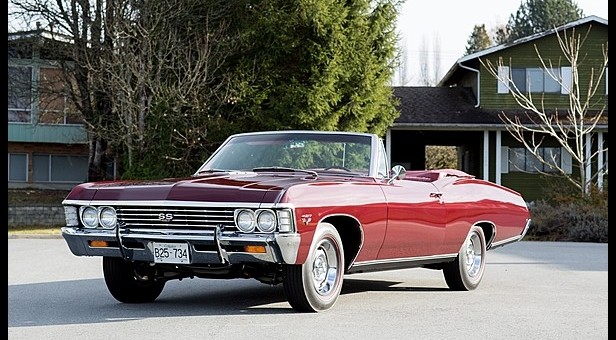 When you ordered a 1966-70 Chevelle SS, you expected a big-block Chevy under the hood. But the Impala? The Super Sport was merely a trim option that for most years included bucket seats and other trim—sporty, but not sport. You could even order a six-cylinder for several years! But, in 1967, Chevrolet introduced an authentic big-block package for the Impala, making it a big brother to the Chevelle SS 396: the SS 427. One of these rare vehicles will be auctioned off at Mecum’s Seattle event being held on June 13-14, 2014.

Just like the Chevelle SS 396, the SS 427 package for the 1967 Impala SS came with special hood and emblems, L36 385-horse 427 paired to a three-speed manual, buckets and console (unless the Strato-back bench with arm rest was specified), round gauges, and special suspension, among other features. Optional transmission were the M20 wide-ratio four-speed or M40 three-speed automatic. While the 425-horse L72 was available for the big Chevys in 1966, for some reason it was missing in 1967 (although it returned for 1968). Only  2,124 Impala SS sport coupes and convertibles were built with the SS 427 package in 1967; it continued through 1969 and then that was it for Chevy’s pure performance full-sizers.

This Madeira Maroon SS 427 convertible four-speed that will be auctioned on June 14 is known to be a true SS 427 because it has “4D” stamped on its data plate. Complemented nicely with a red interior and white top, the seller claims only 35 were built this way, but the truth is that Chevrolet never kept these kinds of records, so don’t get distracted by the apparent rarity claims. With $200,000 spent on restoration, including $42,000 for NOS parts and $40,000 in paint and bodywork, it is more than the car is worth, but sometimes people want the best.