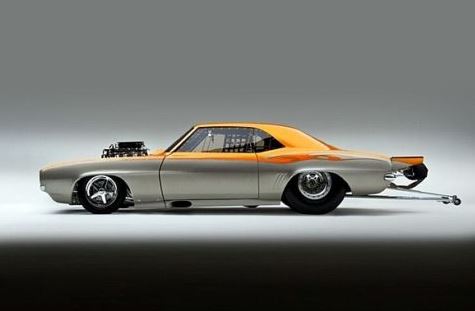 Troy T. Trepanier, President of Rad Rides by Troy, is renown for creating jaw-dropping show cars that can actually hold up on the racetrack. These bespoke Pro Tourers tend to win best-in-show awards anywhere they go, and it just so happens that a custom built 1969 “Race Camaro” is currently being sold on eBay for the price of $159,985. All documentation, including invoices for parts and labor are included with the purchase, as well as DVD’s containing photos of the build in its entirety.

Rad Rides by Troy emphasizes usability over appearance. Performance takes precedent over style in all 35 custom built vehicles created by “Rad Rides by Troy”. While its show car exterior is finished in a majestic brazen orange and smoke silver metallic, the C-N710 cubic inch big block under the hood will blow other race cars away, literally.

With over $600,000 invested in the vehicle, it’s a steal at the asking price of $159,985. “Rad Rides by Troy” has turned this 1969 Camaro into a track monster, with show-stopping looks. If you’re interested in owning this one-off beast of a Camaro, head over to eBay for the complete listing.

Here’s a list of notable parts on the  Camaro specimen:

The seller didn’t list all of the modifications, but considering the $600,000 put into this machine, you get the idea.