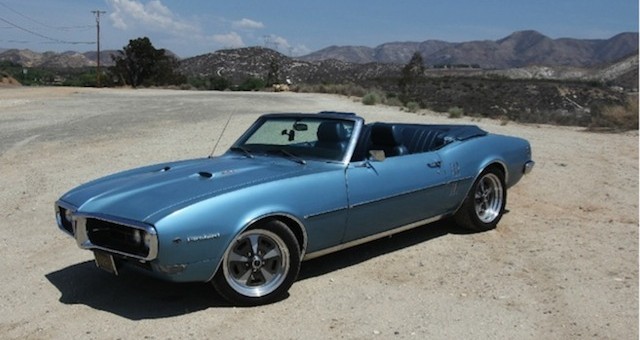 There’s always going to be a butting of the heads between hot rodders and purists. Why would someone want to drive an old car on skinnies and without air conditioning? On the other hand, why would someone want to ruin what was already a perfect car from the factory? These days, thanks to technology, hot rodding gets to exploit the best of both worlds with restomodding. This 1968 Pontiac Firebird convertible is a textbook example of what restomods are all about.

Originally sold in Hollywood, CA, this Firebird convertible was originally bought by a school teacher. Dave Willis is the third owner and the guy with the imagination to do this Poncho right. Under the hood you’ll find a 556-horsepower supercharged LSA, just like the one found in the Cadillac CTS-V. While GM Authority can lament the fact that a Pontiac motor no longer resides up front, we can also respect the idea of modern, reliable horsepower. It’s harnessed by a Tremec TR-6060 manual tranny.

Underneath, a modern independent rear suspension and front tubular construction (with adjustable coilovers, no less) give the first-gen F-body modern handling characteristics. Four-wheel Wilwood disc brakes help maintain the modern characteristics that were missing by the lackluster disc/drum combo of the original.

Inside you’ll find modern heated and cooled buckets, but it’s the subtle items like automatic headlight control, seven-speed wipers, and provision for an iPad Mini that can make this Firebird a delight in modern traffic. If any car has gone back to the future, it’s this one.