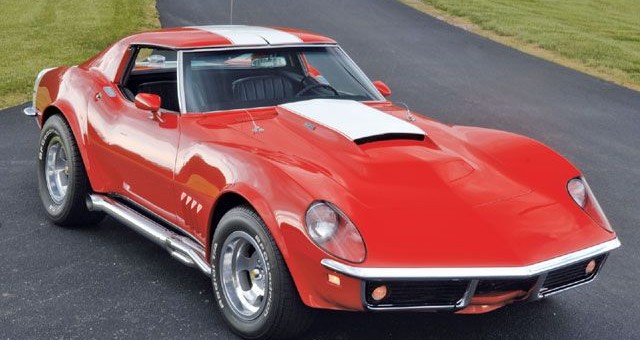 If you’re a Chevy guy, you may know about Baldwin-Motion cars. If you don’t, get ready for the most awesome cars out of the muscle car era. Joel Rosen, a successful drag racer and tuner, ran Motion Performance out in Long Island, NY. He teamed up with Baldwin Chevrolet to built performance cars to meet the demands of discriminating performance customers. Rosen soon began to brand his creations with their own identity, even guaranteeing their Phase III Chevys for 11.5-second ETs; he also had a robust catalog business.

One of those guys with Baldwin-Motion dreams was Joe Robinson. He couldn’t afford a Phase III Corvette, but he bought this 1968 427 Corvette and diligently made his payments. When he was solvent, he ordered a number of Phase III parts from Motion Performance and had a local shop finish the process. He added Motion’s scalloped headlamps, scooped hood, shark fender louvers, rear fender flares, polished Ansen wheels, sidepipes, Motion finned valve covers, and a big Holley carburetor atop a high-rise manifold.

Joe kept the Vette till 1976, then it went through several owners . . . and one of them can be you, as it’s currently on eBay for $127,500. It’s certified by Joel Rosen to be an authentic build, even though it is more of a mail-order Motion car than an actual Baldwin-Motion Corvette. For those always lusting after one of these, this one is about as attainable as it will ever be.