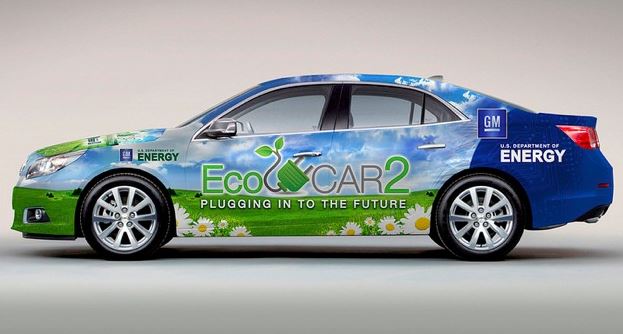 Every three years, engineering students representing different schools from around the country take part in the EcoCAR challenge. A GM-sponsored event in conjunction with the Department of Energy and Argonne National Laboratory, it’s a friendly competition that tests the innovation and knowledge of the students involved, many of which were involved in the program as freshmen. These are brilliant minds at work here, coming up with new ways and techniques on how the efficiency of a vehicle can be improved with minimal compromises. That vehicle of choice this year was a 2013 Chevrolet Malibu Eco (now discontinued), which students turned from a more-or-less mundane mild hybrid to incredible hypermiling prototypes.

One such example was the unique model from Colorado State University, which incorporated hydrogen fuel cells and an electric motor in place of the gas engine and eAssist belt alternating system. CSU students claimed it to be good for around 40-50 electric miles and another 200-250 miles when running on hydrogen. Another was Wayne State University’s 2.4L E85 motor that powered the front wheels while a battery pack powered the rear wheels. Intuitively, the car can run on either the front wheels, rear wheels, or all wheels.

Just as in the real world, however, automakers have to strike a balance between comfort, efficiency, driving dynamics and safety. All of these elements are rolled into the EcoCAR2 challenge. For instance, all school teams must pass a 300-point safety inspection. Though if they don’t pass on the first try, it’s not the end of the world. Teams can always retry. And at the General Motors Milford Proving Grounds, there’s plenty of state-of-the-art equipment to facilitate note only the inspections, but test drives, maintenance, tools and parts.

The result of which gives a very accurate feel of what it would be like to develop an actual production car, which also takes several years and a team of dozens of people to complete. It’s extremely real-world, and unlike any other program in the nation. Not even Formula SAE can match this. What’s more, it’s not just a competition that involves engineers. Also involved are design students, business students, and even communications students. Just as a real production vehicle has all of those people involved in its existence, as well.

And for General Motors, it allows them to see and recruit that talent firsthand. Currently, GM has 100 engineers in its ranks with EcoCAR experience, many of which helped develop intellectual property for the company. Easy to see the benefits there.

However, for a school to get involved in EcoCAR, it must not only scrutinized by the organizers to see if its mechanical engineering program is even good enough to keep up, but the school’s administration must put down a $25,000 pay-to-play seed money. College credits are also not guaranteed for students, though are highly encouraged by the organization to do so. To put it in perspective, even the prestigious University of Michigan was absent from the EcoCAR2 roster.

In contrast, the overall winner of EcoCAR2 was U of M’s arch-rival, Ohio State, which had an E85-electric hybrid setup that resulted in 50 miles per gallon gas equivalent (MPGGE), while using 315 Watt-hours per mile (Wh/mi­) of electricity. The vehicle impressed the judges with stellar numbers and even lessened the amount of criteria emissions by half, compared to the base vehicle.

For the EcoCAR3 challenge, the donor vehicles will be fifth-generation Chevrolet Camaros.