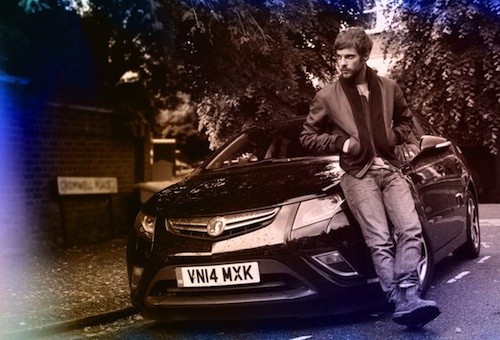 The Vauxhall Ampera plug-in hybrid has landed itself a celebrity endorsement in the United Kingdom in the way of TV’s Harry Treadaway. The British actor stars in the show Penny Dreadful and is known for his roles in other English films, including his work in The Lone Ranger, in which he starred alongside Johnny Depp.

“Given the choice, why wouldn’t you drive a car that can go further without stopping, cost less to drive and is better for the environment? It seems the obvious and only choice if we want to look after our planet,” Treadaway said.

Just as with its American cousin the Chevrolet Volt, the Ampera’s wheels are driven electrically at all times, with the 1.4-liter gasoline engine only switching on to charge the lithium-ion battery. It also has a battery-only range of 25-50 miles, helpful for short commutes and almost essential in London’s congested city center, which is not far from where Treadaway resides.

“It is great to have such a young, talented actor driving a Vauxhall Ampera,” Tim Tozer, Vauxhall’s Chairman and Managing Director, said in a statement. “Harry will be able to prove how easy it is to live with an extended range electric vehicle, showing innovation at its best.”

Who knows, maybe Treadaway will start a trend among Britain’s celebrities with the Ampera similar to American celebrity’s love affair with the Toyota Prius.