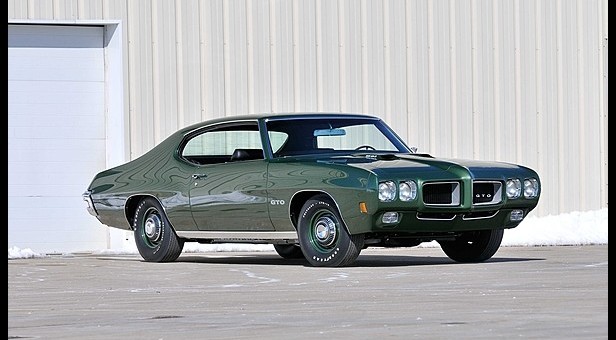 Some feel the 1970 GTO is the best of the series. Its combination of style, power, and class have made it popular with the Pontiac and Brand X crowd alike. This one that’s headed to Mecum’s 27th Original Spring Classic in Indy on May 16, 2014 is among the best of the best.

For 1970, the heavy facelift of the 1968-69 series lowered the point of reference, giving the GTO a sleeker look. A new nose resembled the styling of the 1969 Firebird, but it was all in Endura plastic (and without the option of hidden headlights). New bulges sprouted above both wheels, seemingly inspired by the Mercedes Gullwing. And, underneath, a rear sway bar finally gave the GTO the chops to compete with the Olds 4-4-2, which was famous for its handling prowess compared to other cars in the market.

This 1970 GTO is painted in ever-popular Pepper Green and is equipped with the rare Ram Air IV motor. This one was likely ordered for racing, as it was ordered new with a bench seat (quite uncommon on GTOs), four-speed manual, no radio, drum brakes, no power steering, and 4.33 gears. Restored by Darrell Davidson of Supercar Creations (himself a GTO Association of America judge), you’d have to search far and wide for a better GTO of this vintage. Mecum estimates bidding will hit $90-120,000, which may be just about right for a concours Ram Air IV GTO.