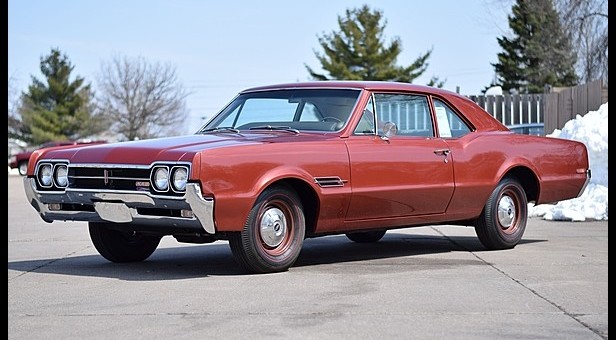 Last week GM Authority showed you a 1967 Olds 4-4-2 with the W-30 package that will be hitting Mecum’s 2014 Spring Classic in Indy later this week. We told you about how the W-30 package came to be in 1966, and how most of them were destined for NHRA drag racing. This ’66 is a similar car in spirit.

Truth be told, some more history is needed: in 1966, the 4-4-2 package was available on the F85 Club coupe, F85 Deluxe Holiday coupe, Cutlass Club coupe, Cutlass Holiday coupe, and Cutlass convertible, with the Club coupe having a B-pillar and the Holiday being Oldsmobile’s way of saying “hardtop.” The L69 400 motor substituted 3×2 carbs for the 4bbl., and the W-30 package added some more heady-duty items including a unique air induction system. Only 647 F85 Club coupes were built with the 4-4-2 package, with 157 of those having the L69 motor.

This one at Mecum, which will hit the block on May 17, is claimed to have been ordered without a radio or even a heater. However, with a car like this, you must have some form of documentation to show the car is what it is claimed to be—we can see that $88,000 was spent restoring the Olds, but how do we know it’s a real L69 car? Then it’s claimed it’s a real “drag pack” 4-4-2 with “triple-carbureted forced-air V-8” but in the photos there’s no indication of ram air, which would ordinarily indicate it’s one of the 93 or so cars to receive the W-30 package from the dealership. What is this car? For an estimate of $100-125,000, this car better have paperwork or some paper trail.