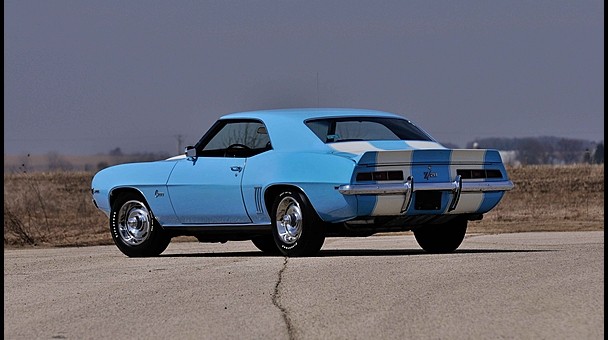 Over the past few weeks, GM Authority has spotlighted a few of the cars that went down the block at Mecum’s Original Spring Classic 2014. Held from May 13-18 at Indiana State Fairgrounds in Indianapolis, over 1,000 cars were auctioned. Here are the cars we covered, the estimated auction price, the actual top bid, and additional commentary:

To some Pontiac F-body fans, this is considered the fastest ever—even faster than its successor, the 1969-70 Ram Air IV. With 110 built, originals are not easy to find, and there likely are more sitting around without the owner knowing because the only way to determine for sure (other than tell-tale signs like build date and rear gears) is to obtain the original invoice. Mecum estimated it would hit $150-200,000, and the Firebird sold on the near side of that differential.

Most people are familiar with 1969 Yenkos, which were COPO Camaros with a dealer-installed stripe package and several modifications depending on the mood of the owner. The earlier cars, however, are much rarer and were engine transplants, albeit with a modicum of branding. Mecum thought this one would go for $375-450,000, but it sold for $320,000.

Compact cars are for librarians, but load one up with the Corvette’s 327/350 and you’ve got yourself a Hemi-killer (provided you’ve got the tires to prove it). This one has only had one owner, and combine that with the triple-black trim combo and you have a very desirable early Chevy muscle car. These cars aren’t particularly rare, but Mecum thought that it would hit $200-225,ooo. The seller wouldn’t take the $175,000 top bid—insane!

Chevrolet made a lot of solid-lifter hi-po small-blocks in 1969, but this one is different—it was optioned in a special-order color. For some reason, Mecum felt this one was worth so much more than other Zs that have gone down the block ($250-400,000) but just for a color? The high bid was $450,000, and the seller didn’t take it. Wow—a real Yenko Camaro would go for that! But a little research on Chevy sites tell more of the tale: one person smartly points out that “in the consignment contract, the auction house has the right to bid the car up on their own, to just under the reserve, with the hope a real buyer push it over the reserve.” Someone else says it’s been on eBay for three times over the years, and no cross-ram documentation has been provided. What’s the truth? Who knows, but it seems like this Z was bid up to something WAY more than what they’re normally worth . . . and then the seller didn’t take it.

This heavily accessorized top-of-the-line Buick has the toothy grille the ’50s are known for. Looks a bit overdone with all those accessories but some people like that stuff. If you ever wanted a Buick that thought it was a Cadillac, this was it. Mecum estimated it to go for $125-150,000, but it only hit $96,000, which was enough for the seller to let it go.

I’ve seen this GTO in person, and it’s absolutely gorgeous. It’s a great example how, despite the GTO becoming heavier and more luxurious, it still had the suds to keep up with the fastest when properly equipped. And this one had it all, like digger gears, bench seat with four-speed manual, and not much else. $90-120,000 was what Mecum thought it would hit, but the best the seller could get was $79,000, which wasn’t enough to let go.

Everyone goes ga-ga over Chevys, but Oldsmobile held their own quite well, thank you. This W-30-equipped 4-4-2 is one of 502 built in 1967. Precious few cars were faster that year, plus none of them had the nifty air induction system that Olds had. Mecum estimated it would hit $50-60,000 and, indeed, it sold for $61,000. Word on the street (i.e. the Internet) was this one was nice but not perfect from a W-30 perspective, having a few incorrect parts that detracted from achieving full value.

Compare the above Olds with this one. This one doesn’t have the top engine, but it looks like it was built for drag racing. Was it done that way originally or were some liberties taken with the restoration? Mecum estimated it would hit $100-125,000—strange considering it’s not a W-30—and the bidders apparently agreed, stopping at $60,000 for a no-sale.

Before General Motors banned its participation in racing, Pontiac came out with this, one of 14 cars with holes drilled in their frames to lighten them (hence the “Swiss Cheese”). All were Catalina hardtops painted silver, if I’m not mistaken. This one came from Packer Pontiac, one of Detroit’s premiere Pontiac dealerships, although they never had the panache or reputation of Royal Pontiac. The Catalina was expected to sell for $600-800,000, but the owner decided to let it go for a $530,000 bid.

The 1930s were a great decade to be rich. While most of America was suffering through the Depression, the rich had unprecedented luxury and style available to them. This Cadillac is a first-year V12 in a jaunty bodystyle that would be great for a short trip to Greenwich. Only 91 people ordered one like this, and chances are all of them were custom-ordered in their own way—”bespoke” is the term used for these vehicles. Mecum expected the Caddy to hit $235-285,000, but it only reached $215,000. The seller decided to take it.