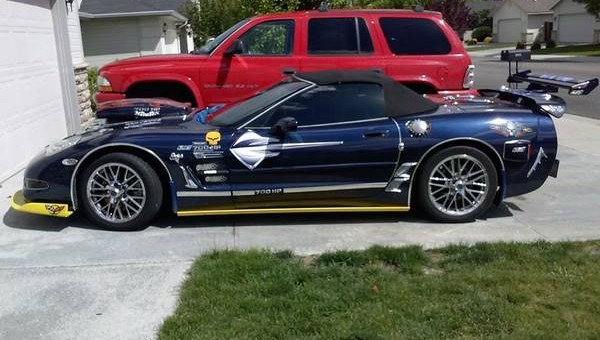 Normally, when it comes to other peoples’ car modifications, our motto is to each their own. Do you want to put 28-inch rims on your Camaro? Go ahead. Want to make your C3 Corvette into some sort of off-roading machine? Sure, why not? It’s your car after all. This 2001 Corvette convertible which recently popped up for sale on Craigslist however is so bad, that it makes us feel personally insulted.

If there is one word to describe this car it’s “offensive”. The tack on fender vents, fake hood scoop and additional chrome trim would be bad enough on their own, but it gets so much worse than that. There are skull-themed taillight covers and skull exhaust tips, flame decals and a hideous yellow-painted front splitter. All those mods clearly added about 500 horsepower, so instead of one wing, this speed machine needs two. Y’know, for downforce.

The pictures are bad enough, but once you delve into the text in the ad is when things start to get really ridiculous. The seller states it has a “Billy Goat” exhaust, were pretty sure they mean “Billy Boat”, unless there is some new goat-themed exhaust on the market which somehow went unnoticed by us. It also states the car has “two electrical turbos” and a Diablo-tuned engine, which the seller says should put it “around the 700 hp mark.” Sounds about right to us.

It’s too bad this atrocity wasn’t in the Sky Dome room of the National Corvette Museum when the sinkhole opened up in February, because we have a feeling the construction crews would have just left this one. The ad for the car was taken down soon after it was posted, but not to worry, you can probably make an exact replica with parts found at your local Wal-Mart.