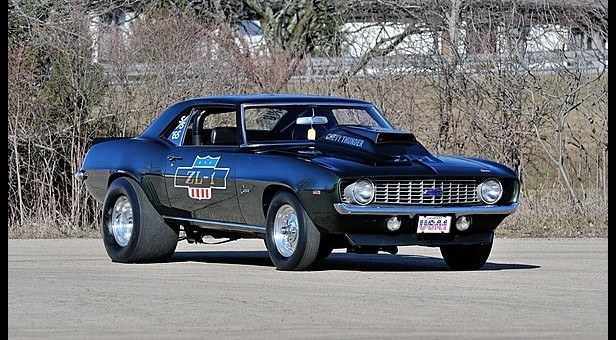 GM Authority has written extensively about the cars that appeared at Mecum’s Spring Classic 2014, but we haven’t written about this Camaro ZL1. Only 69 of these holy grail Camaros were built, so they’ve always been an expensive proposition. This one, one of three ordered with COPO 9737, sold for $340,000.

If you’re not privy to Chevrolet’s COPO channel, here’s the background: normal cars for you and me were ordered and optioned out with Regular Production Orders, but the Central Office Production Order channel was used for fleet orders, like for utility companies, that required special paint schemes and other non-regular production items. In this Camaro’s case, it’s a double-COPO—it’s COPO 9560 because the 427 normally was not allowed to be installed in the Camaro, and the COPO 9737 was a sub-package created for 427 Camaros that included E70-15 tires, 15-inch Rally Wheels, a 140-mph speedometer, and 1-inch front stabilizer bar (on the window sticker, it was called “Sports Car Conversion”).

Of course, the ZL1 was Chevrolet’s aluminum version of the L88, a seven-liter racing motor rated on paper as 430 horsepower, although slap some headers on and you’d likely see 560 horses. This Fathom Green car originally listed for $7356.15 (a similar Camaro SS 396 was more like $4000) and has been a race car all its life since being sold at Lavery Chevrolet in Alliance, OH. The sales manager for the dealership, Roger Cunningham, was the driver. It is #65 of the 69 built, and at one time it was a national record holder.

Considering the special-order Z/28 that hit $450,000 in the same auction, this ZL1 seems almost like a bargain.