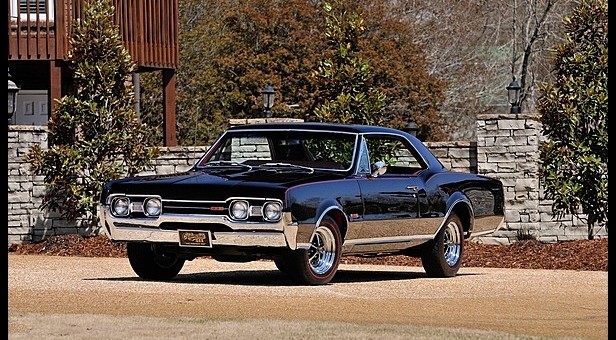 Back in the day, Oldsmobile‘s models were based on numbers, such as the 80 and 90 series; when they had V8s, they became the 88 and 98. Names like Starfire and Cutlass eventually joined them, but when Olds created a car to compete with the Pontiac GTO, they reverted to the numbers game with the 4-4-2 package. One of the fastest versions was the 1967 model with the W-30 package, one of which is hitting the block at Mecum’s 27th Original Spring Classic at Indy on May 9, 2014.

The W-30 package shares a lot with the Camaro Z/28, as both of them were built for sanctioned racing, and both had option codes that eventually become branded with their own respective identities. It was introduced mid-year 1966 as an option on top of the tri-carb L69 motor, which put out 360 horsepower. The W-30 package was rated the same (no doubt to have it factored in a better drag racing class) but included a bigger cam, springs, battery relocated to trunk, and an awesome air induction system (Olds called it Outside Air Induction, or OAI) that involved a special air cleaner and long tubes that were routed to the lower bumper cavities. Only 54 W-30s were built from the factory, plus a handful (it’s believed 93) of dealer-installed versions called the “Track Pack.”

For 1967, the 4-4-2 was facelifted, and a new General Motors edict eliminated multiple carburetion except for the Corvette. The W-30 now made do with a four-barrel, but horsepower stayed the same at 360. Equipment was similar otherwise but with the addition of red plastic front fender wells, which would become a signature through 1971. The the OAI was now routed to the cavities between the headlights. Only 502 were built.

This 1967 W-30 that will be auctioned later this week. It’s black with a red interior, which should make it highly desirable to many collectors and would-be collectors (although originally this car had a white vinyl top). Other options on this car are Super Stock I wheels, console, and power steering (the latter added during restoration). If you have love for the Rocket Division and like your cars rumpety-rump and mechanically pure, you can skip that solid-lifter 396 Chevy and try out something faster.