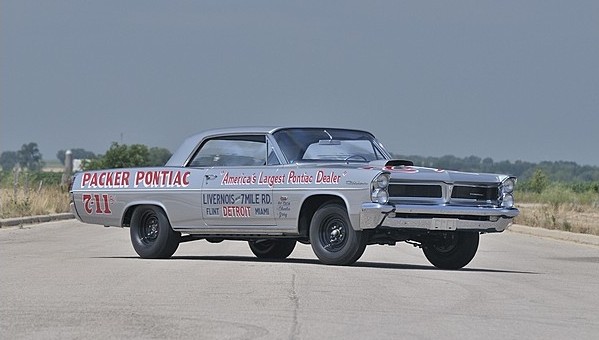 In 1962, Pontiac was falling behind Chevrolet, Ford and Chrysler in the Super Stock drag racing ladder. The other teams had bigger engines and lighter aluminum parts, forcing Pontiac engineers to step it up for the 1963 season. They developed a lighter, more powerful car which would go down in history as the 1963 Pontiac Catalina “Swiss Cheese”.

The “Swiss Cheese” Catalina got its name from the 120 holes drilled into the sides of the frame rails, which helped remove as much unneeded weight and material from the car as possible while maintaining its structural integrity. Further modifications included cutting the inside section away from the boxed rails, removing the front sway bar and substituting it with aluminum and removing insulation and sound deadening. Certain body panels were also replaced with aluminum ones including the hood, inner and outer front fenders, splash pan, radiator bulkhead, bumpers and brackets.

Under the hood sat a 421 V8 engine with Mickey Thompson pistons, a McKellar camshaft, lightweight valves and heads and a lightweight flywheel. According to Mecum, the engine produced a robust 410 horsepower, which helped propel the 3,300 pound car down the quarter mile in around 12 seconds at 120 mph. Many of these Catalina’s were originally equipped with a Borg Warner 3-speed transmission, however the majority were later converted to a BW 4-speed.

Mecum will auction off a 1963 “Swiss Cheese” Catalina at its upcoming Spring Classic auction in Indianapolis. The model for sale is one of the more famous cars of the 14 built and was driven in 1963 by Howard Maselles, who set the NHRA Stock class record in it with a 12.27 ET. The car was discovered by Pontiac collector Randy Williams in the late 1970’s and restored in 2000. It is extensively documented with records and photographs, including the original “For Sale” flyer created for the car at the end of the 1963 NHRA season. It is estimated to sell for $600,000 – $800,000 when it goes under the gavel on Saturday, May 17.