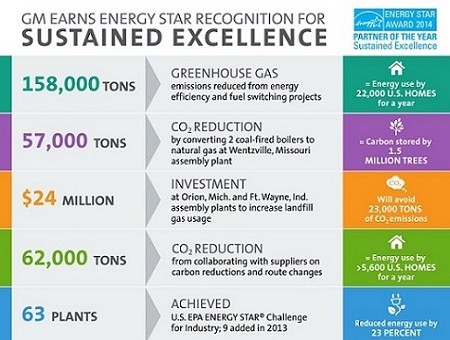 General Motors has been awarded with a 2014 Energy Star Partner of the Year Sustained Excellence Award for its ongoing leadership in protecting the environment through energy management. It marks the second year in a row GM has been recognized by the U.S. Environmental Protection Agency with the award.

The EPA also bestowed GM with the Climate Communications Award for its efforts to raise consumer awareness of climate change. The automaker says it shares its energy efficiency practices with suppliers, partners and customers by amplifying the positive effects energy-efficient behaviors can have on the environment.

GM says it is committed to cutting carbon intensity at its numerous facilities by 20 percent by 2020. Since 2010, the company has reduced energy intensity by 11 percent. Some of the environmentally friendly efforts it has launched in the past year include converting two coal-fired boilers to natural gas at its Wentzville, Mo. plant, resulting in a carbon reduction of 57,000 tons and changing the delivery and shipping routes of its suppliers to cut CO2 emissions by 62,000 tons.

“As the world faces sustainability challenges, we strive to be part of the solution—from designing more efficient vehicles to transforming how they’re built to reduce environmental impact,” Mike Robinson, vice president of GM Sustainability and Global Regulatory Affairs, said in a statement.