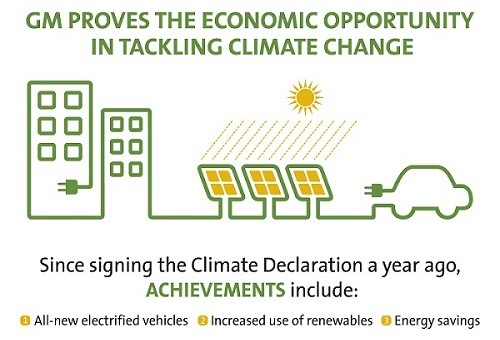 Last year, General Motors signed the Climate Declaration, an annunciation voicing American companies support for policies which serve to reduce emissions and promote investments in clean technology. It currently has more than 750 signatories, of which GM is the only automaker.

Since they signed the declaration a year ago, GM says they continue to prove there is economic opportunity in tackling climate change.

“The world is changing and we are making bold moves to ensure we remain relevant to customers and conserve the resources our industry relies on,” Mike Robinson, GM vice president of Sustainability and Global Regulatory Affairs said in a statement. “We are restructuring our entire portfolio to maximize vehicle efficiencies with the intent of setting a new standard in fuel economy and reducing carbon emissions around the globe while we meet a variety of customer needs.”

Along with their fuel-efficient and electric vehicle lineup, GM has also demonstrated an environmental commitment through responsible manufacturing, from using renewable energy to increasing energy efficiency. This was exemplified when the U.S. Environmental Protection Agency bestowed GM with a 2014 Energy Star Partner of the Year Sustained Excellence Award for their carbon reduction efforts at numerous production facilities around the world.

Since signing the declaration, GM has met the Energy Star Challenge for Industry at nine more of its plants for an industry-leading total of 63 facilities worldwide. This reduces energy use by 23 percent on average, saving the company $162 million in energy costs. They have also converted municipal waste from Metro Detroit to process steam in order to heat and cool portions of Detroit-Hamtramck assembly plant, completed Ohio’s largest rooftop solar array at the Toledo transmission plant, and earned ISO 50001 certification for energy management at two facilities in Argentina and Mexico, for a company total of nine worldwide.