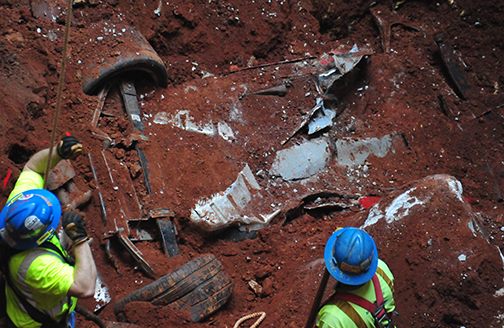 As of last week, seven of the eight Corvettes which fell into a sinkhole that opened up in National Corvette Museum had been recovered, but one car, the C5 Z06 Mallett Hammer, was still nowhere to be found. The car was one of the first to fall in the sinkhole, and has been buried under rocks and debris the entire time the team has been searching for it. Thankfully, after almost two months of searching, the construction crews stumbled upon the Mallett Hammer Monday evening.

Predictably, the Mallett Hammer appears to be in the worst shape of all the Corvettes which fell victim to the hole. The Corvette Museum was only able to photograph the cars underside, as the rest of the car is completely buried under rocks and dirt. Teams attempting to extract the car have been pouring water into the hole to try and make mud, which is easier to vacuum up out of the hole than dirt. The rocks on top of the car must also be removed individually to prevent the debris from shifting and re-burying the car.

When construction crews manage to pull the Mallett Hammer out of the hole, we’re sure they will breathe a sigh of relief after working tirelessly to retrieve the priceless sports cars from Mother Nature’s firm grasp. We’ll keep you posted on the situation, in the meantime, you can see what the recovery team is up to through the National Corvette Museum’s live webcams.

Update: The rocks and debris have been lifted off the C5 Z06 Mallet Hammer and it is in the process of being lifted back onto safe ground. Unfortunately, it appears to be in even worse shape than the 1991 Corvette ZR-1 Spyder. 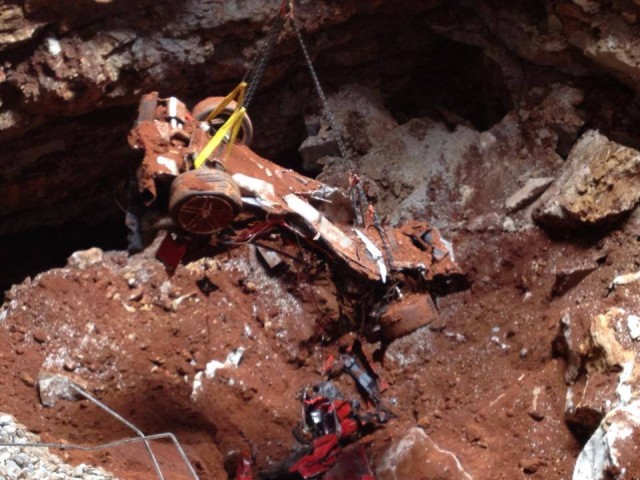