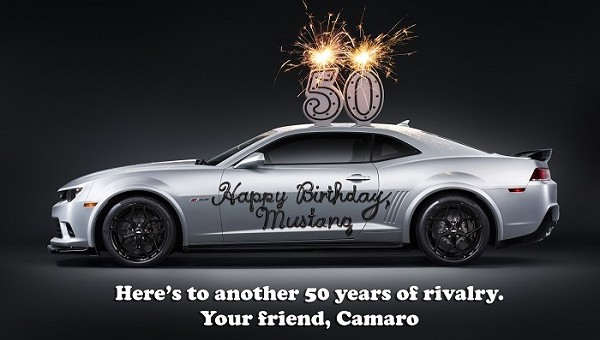 Coca Cola vs. Pepsi, Jay Leno vs. David Letterman, Microsoft vs. Apple, these are the great American rivalries of our time. Sometimes, rivalries between two companies become so bitter, they lose sight of what they were trying to accomplish in the first place. But most rivalries are healthy, forcing both sides to continuously better themselves as well as their product, and in the end, the consumer becomes the real winner. A perfect case in point is another famous American rivalry, Mustang vs. Camaro.

The Mustang and Camaro have been battling it out for pony car supremacy since 1967. Just uttering the words “Mustang, or Camaro?” at a car meet or around enthusiasts of either side can spark an argument. But as bad as the blood between the two groups may be, they have each other to thank for how successful both nameplates are.

“For five decades, the Camaro and the Mustang have been battling it out in every possible setting,” said Mark Reuss, executive vice president of GM Global Product Development. “These two cars have been striving to beat each other on the track, on the drag strip and on the streets. That competition is a big part of why both cars are so amazing, and so popular, today.”

Ford rolled out the Mustang 50 years ago this week, creating a whole new segment of transportation, the pony car. Three years later, Chevrolet answered back and introduced the Camaro as a direct competitor to the Mustang. It’s only appropriate then that Chevrolet wishes its most bitter-sweet rival a happy birthday as both cars look forward to another 50 years of healthy competition.

“The new Camaro hit the ground running, and it’s been a battle royale ever since with the bowtie vs. the blue oval,” said Ken Gross, a veteran automotive journalist. “Chevy readily admits its Camaro is constantly getting better, thanks to intense competition from Ford, and I’d agree.”