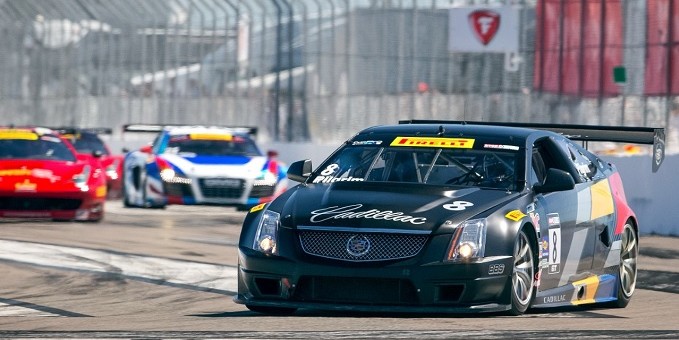 Andy Pilgrim, Johnny O’Connell and the entire Cadillac Racing crew are readying for the second round of Pirelli World Challenge racing set to be held in Long Beach, CA. this weekend. Pilgrim is hoping to carry the momentum of his second place finish in St. Petersburg to the west coast, while O’Connell will be looking to redeem himself of his 10th place finish in the season opener.

Thanks to his podium finish in St. Petersburg, Pilgrim is currently second behind Thomas Enge in the Pirelli World Challenge GT point standings. O’Connell had a disappointing start to his season and will be looking to make up for both his finish in Florida last weekend and his race in Long Beach last year. The 51-year old was leading last year’s race in the final laps, but his wining hopes were thwarted by a piece of brake rotor from a competitors car that shot through his radiator, stopping his car on the circuit just five corners from the checkered flag.

“I enjoy street races and Long Beach is one of my favorites,” Pilgrim said of the ocean-side track. “I think this track really suits the Cadillac and it’s a blast to drive. Like any track where we have two classes running, patience is key to finishing strong. We really don’t set-up the CTS.V.R much different in Long Beach than St Pete and we were strong at St Pete, so I’m hoping we’re right on the pace again this weekend.”

Cadillac Racing walked away with the championship last year, but the team recognizes the additional challenge presented in 2014. Changes to the rules allow teams to campaign the internationally bred FIA GT3-spec touring cars, such as the McLaren 12C GT3, which are said to be superior to the cars developed specifically for World Challenge racing like the Cadillac CTS.V.R.

“I think St. Pete was a set-up run for many of the new cars and drivers,” Pilgrim said. “We were ready and Team Cadillac had the CTS.V.Rs set-up. We know the FIA cars are stronger than us, Tomas Enge proved that, so it’s just a question of time until all the new drivers and engineers get their cars sorted.”

The Pirelli World Challenge Series Grand Prix of Long Beach presented by Kia will be a single race weekend, unlike last weekend’s double header. The standing start will commence on Sunday, April 13 at 4:30 p.m. PT following the IndyCar race.  The race, along with every other on the World Challenge schedule, is available for viewing online throughout  the year right here.