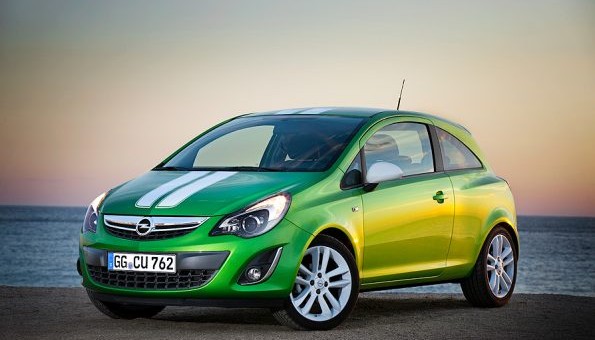 We have seen spy shots before of the updated 2015 Opel Corsa hatchback, which will wear a front fascia with styling akin to that of the Opel Adam minicar. But this latest round of pre-production photos, which come courtesy of Autoevolution, tell a different story about the Corsa than the ones we saw earlier this year.

In previous pre-production photos, the new Corsa appeared to have only an updated front end, with the rest of the car from the front bumper backward appearing identical to the current model. However these photos show a Corsa with the Adam-esque front end as well as an all new rear hatch design and possibly some styling changes to the side profile which may be masked by the camouflage. The side doors, side window shapes and rear hatch glass appear to have remained the same, though.

Autoevolution’s photographer also managed to grab an interior photo of the car, which shows an all-new dashboard and center console, as well as a steering wheel which bears a striking resemblance to the one seen on pre-production versions of the 2016 Chevrolet Cruze. Other spy shots also showed the new Corsa’s air vents, which are similar to those on the Adam, and its instrument cluster.

As far as engines go, the new Corsa will utilize one of General Motors’ units from Ecotec family of engines. A 1.0-liter SIDI turbo, in either 90 or 115 horsepower form, has been confirmed for use in the Opel Adam and will most likely find its way under the hood of the Corsa as well, but we’ll have to wait until the car’s debut later this year for confirmation on its powertrain. Check out the photos here and let us know what you think of this latest round of revisions in the comments below.