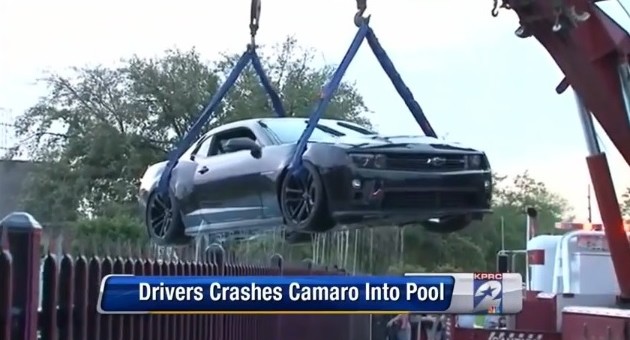 Here’s a tip, when driving your brand new, 580 horsepower Chevrolet Camaro ZL1, you should probably leave your traction control on unless you really know what you’re doing. Unfortunately, no one ever told that to the young driver who managed to crash his 2014 Camaro ZL1 into a community pool in Harris County, Texas last week.

“I was driving right behind him the whole time,” Austin Brantley, who knows the driver,  told Click2Houston. “He lost control, and I think he took his traction control off. And then he just hit the curb, and then went into the fence, and then he hit the pool.”

Luckily, the driver of the $57,650 ZL1 had the window open when he lost control of the car, and climbed out of it unharmed after the vehicle was submerged in the pool. His charges are pending. but he could be cited for either failure to control speed, unsafe speed or other charges. He will also have to cover charges for cleaning up any chemicals spilled into the pool from the car.

There is no word on what the ZL1’s fate was, but we’re assuming it will be written off as a total loss. Check out the report on the accident from Houston’s local NBC affiliate below.