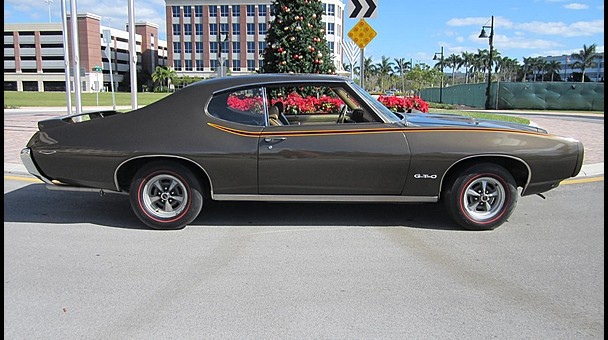 Amidst all the high-dollar vehicles and perfumed pigs, there were several nuggets to be had at Mecum‘s Kansas City Spring 2014 auction that just wrapped up this past weekend. One that caught our eye was this 1969 GTO Judge.

If you know the Judge’s history, you know it originally started out as a Plymouth Road Runner-fighter but ended up being a deluxe GTO with all the bells, whistles, stripes, and spoilers. After an initial run of 2000 or so Carousel Red Judges, Pontiac allowed consumers to order one in any GTO color. Standard motivation was the Ram Air III 400, which was optional on the base GTO, while the top option was the Ram Air IV 400 rated at 370 horsepower. A bit over 700 GTOs had this motor in total, with only 297 and five of those being hardtop and ragtop Judges, respectively.

So when GM Authority noticed this Expresso Brown RAIV Judge, we thought it would command a decent price. While brown is not everyone’s favorite, Expresso Brown is one of the few that don’t count as a demerit, actually giving the Goat a rich look; inside you’ll find a gold interior. Options showing on the car include hood tachometer and hidden headlights, plus a few modifications made for the sake of drivability.

So why did this Judge sell for only $44,000 when some RAIII Judges have hit over 100 grand? Some theories:

A car of this caliber must have everything factory-correct for it to achieve a top price (unless a bidder has had too much to drink…). Without having seen the Judge in person, we can’t say for sure whether it was truly a bargain, but $44,000 is a nice price for what is for many people the ultimate and fastest GTO ever built.