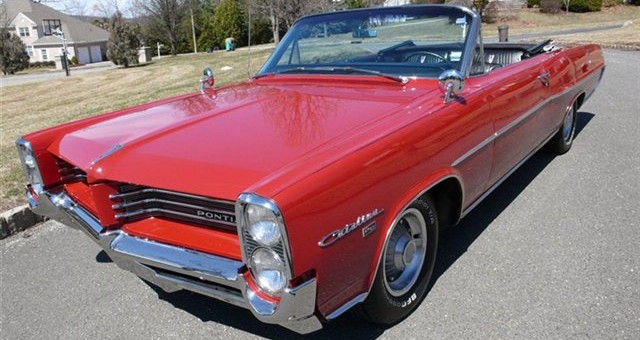 Pontiac was hot in the 1960s. So hot that it stole the number-three spot from Plymouth, which was having its own issues of ugly styling and a size that was slightly smaller than what Americans expected in their chariots. Pontiac, on the other hand, had a youthful image, trademark styling (split grille, anyone?), and one hit after another. After the introduction of the ultra-clean 1963 Grand Prix—one of the best sophomore efforts ever—Pontiac followed it up with the GTO for 1964.

Hardly the ingredients to make a performance car, right? Truth be told, the 2+2 was merely Pontiac’s version of the buckets-and-console package that was popular in Detroit at the time (most notably the Impala SS). The 2+2 could be specified to have the 421 motor with up to 370 horsepower with Tri-Power, upon which it could be considered the GTO’s big brother but, as a stand-alone package, the 2+2 screamed sporty, not performance.

That would all change in 1965, when the 2+2 came standard with the 421/338 and could have up to 376 horsepower with the 421. Only then could it properly be considered the GTO’s big brother. The 2+2 lasted through 1967 but, for the Canadian market, it always was a bucket-and-console trim level and continued on through 1970 with options up to the LS5 454 (you remember Canadian Pontiacs had Chevy motors, right?).

There’s no production numbers on how many 1964 2+2 convertibles were built, but it is known that 7,998 cars were built in total. This one on eBay may or may not be a real one—strangely, the seller makes no mention of the engine and doesn’t present the original invoice, which is available from PHS (Pontiac Historical Services). As a big, sporty, four-speed cruiser, it’s a great car, but not $48,600 worth without some form of documentation.