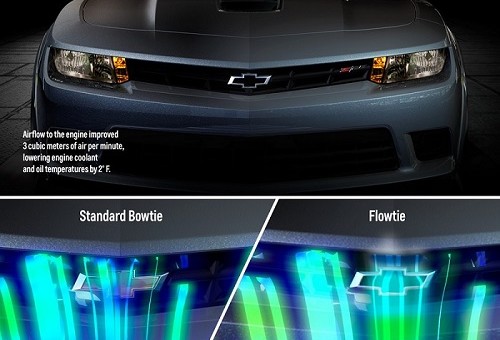 Chevrolet engineers went to great lengths to make the 2014 Camaro Z/28 the fastest, most track capable production Camaro ever. The team made massive changes to the car to improve aerodynamic performance and reduce weight.  For example, the rear window glass is thinner, the rear seats are lighter and the A/C unit can be deleted, not even the classic Chevrolet bowtie was safe from Chevy’s obsessive pursuit of performance.

During aerodynamics testing, Powertrain Cooling Development engineer Richard Quinn found that the Chevy bowtie on the front of the Z/28 was deflecting air away from the car’s radiator, which can reduce engine cooling and negatively affect track performance.  Quinn knew removing the iconic emblem altogether was not an option, so like engineers do, he found a solution.

Quinn took a grinding wheel to a standard Chevrolet bowtie, cutting out the gold center of the emblem and leaving the silver lining intact. He then installed the prototype emblem on the Z/28 and retested the results.

“There are engineers in our team that race as a hobby,” said Quinn, “and we used that racer’s mindset to look for ways small or large to get better performance out of the Z/28. Even the smallest details on the Z/28 were weighed for cooling benefit, and this is one that stuck.”

Quinn’s simple solution, which engineers have affectionately named the “flowtie”, proved to increase cooling by a wide margin. The addition of the flowtie alone allows 3 more cubic meters of air to enter the engine per minute. As a result, the flowtie helped reduce engine temperatures by 2°F during extended sessions on the track.

“The Flowtie is just one example of the team’s focus on track performance,” said Al Oppenheiser, Camaro chief engineer. “That same attention to detail is evident throughout the cooling systems for the LS7 engine, as well as the carbon ceramic brakes and the differential.”