Vehicle extraction efforts at The National Corvette Museum had a lucky break today, when construction crews were able to resurrect the 1992 Millionth Corvette from the depths of the facility’s sinkhole.

At first, construction crews had no intention of pulling the Millionth out, but decided to give it a try as they saw the vehicle at the bottom of the hole.

“Initially there was no intention to bring the Millionth out, but as we got in there and saw more this morning we did feel like this might be our best chance,” said Danny Daniel, President of Scott, Murphy and Daniel Construction.

The crews first pulled the car by one wheel from where it was lodged, which swung the vehicle into the cavern. From there, they were able to lift it and place it to rest upside down on the bottom of the sinkhole. Then, the Corvette was hooked up by its two tires to be lifted out of the sinkhole, a process similar to that used to retrieve the 1993 40th Anniversary. 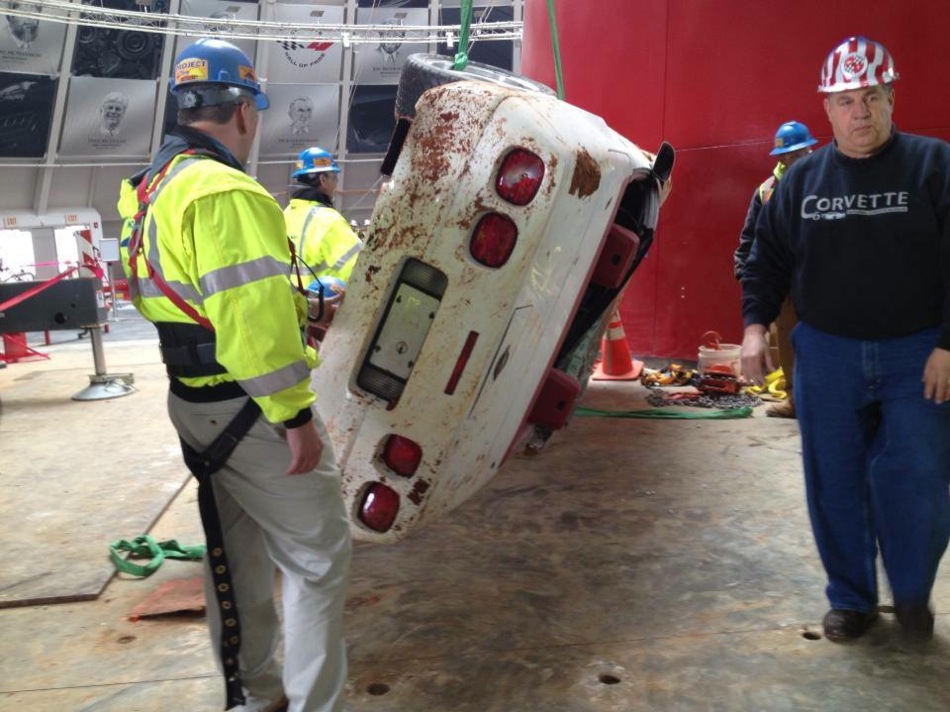 Although it has body damage galore, the historic Vette could have been in worse shape.

“The Millionth Corvette has been through a lot, but the damage at first glance seems to be less extensive than what it could have been, especially given the precarious spot the car landed,” said Bob Hellmann, Facilities and Displays Manager at the Museum. “The undercarriage and frame look to be in good condition and everything else is repairable.”

As the National Corvette Museum notes, the Millionth Corvette was built on July 2, 1992 at 14:00 in Bowling Green, Kentucky. Just like the first 1953 Corvettes, it features a white exterior, red interior and is a convertible, and was donated by General Motors to the Corvette Museum.

Here’s a video of the Millionth being pushed into the Exhibit Hall:

The successful extraction of the Millionth brings the total count of rescued models to four as of March 5th, 2014 — representing half of the cars that fell victim to the giant sinkhole, which might or might not have been created by Godzilla. The other three Vettes extracted so far include the 2009 ZR1 Blue Devil prototype, the 1993 40th anniversary coupe, and the 1962 Vette.

Next, the museum hopes to add four more cars to its list of rescued vehicles, displayed them for visitors to see in their beat-up and dusty forms, before fixing them up with GM and Chevrolet. To do so, construction crews will continue to stabilize the spire and walls of the sinkhole before attempting to vacuum out the dirt from around the remaining cars.