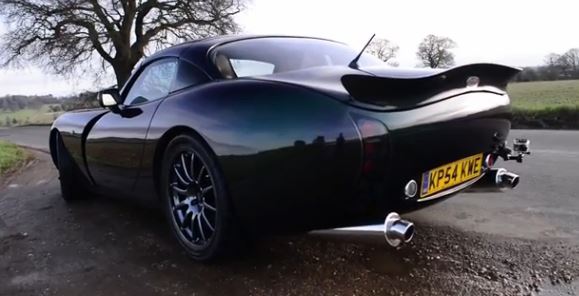 “Hybrid” these days may mean a car that is powered by a internal combustion and electric motor, but to Luddites like me, it’s a vehicle that is from one country with horsepower from another. Automotive history is littered with great hybrids, such as the Shelby Cobra, De Tomaso Pantera, Iso Grifo, and the Monteverdi Hai. Now you can add TVR Tuscan to the list.

That’s a bit of a stretch, really, but we really dig this TVR that has received a dose of LS7 power.

TVR has had its ups and downs over the years–especially considering it’s currently defunct–but the little company out of the UK has always maintained a unique position in the sports car world with their own motors, tubular steel chassis, and fiberglass bodywork. Nevertheless, Topcats Racing, an endurance racing team about 60 miles outside of London, got ahold of a TVR Tuscan and dropped in a 427cid LS7 V8 courtesy of the Motor City to see what kind of magic could be produced.

With over 500 horsepower on tap in a vehicle weighing no more than 2500 pounds, the recently-crowned hybrid has a power to weight ratio rivaling that of the Pagani Zonda F, according to Road & Track. Take a gander at the below video to see why the British and Americans get along so well.