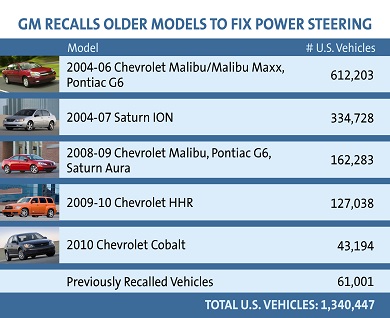 More bad news for General Motors has emerged after the automaker announced today that it would recall an additional 1.3 million vehicles in the U.S. The recall comes as the company pledged it would perform an intense review of its internal processes, which was prompted by the controversial recall of more than 2.5 million of its small cars worldwide. GM expects to take a hit of up to $750 million this quarter due to the cost of recall-related expenses and repairs.

The Problem: Vehicles included in the recall may experience a sudden loss of electric power steering assistance. This could make steering inputs harder, resulting in an increased risk of an accident. GM says if power steering assist is lost, a message displays on the Driver Information Center and a chime will sound to inform the driver of the failure.

Number of Vehicles Being Recalled: 1,340,447 vehicles are included in this round of recalls.  In addition to recalled models, GM will give 309,160 non-turbocharged Chevrolet HHRs from the 2006-2008 model years (and several hundred 2009 models) and 96,324 Saturn IONs from the 2003 model year extended lifetime warranties for replacement of the electronic power steering motor.