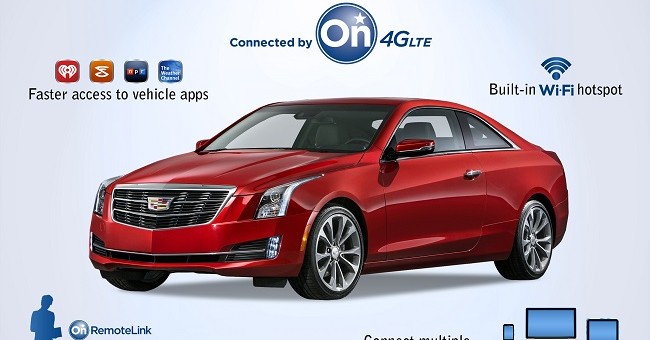 Cadillac has announced the 2015 ATS Coupe will be the first vehicle to introduce the company’s OnStar 4G LTE system and Cadillac CUE Collection of apps when it goes on sale this summer.

OnStar 4G LTE provides a faster, stronger internet connection for running in-vehicle applications compared to the outgoing 2G/3G system. The built-in connection serves as a mobile Wi-Fi hotspot for the occupants, which can accommodate up to seven devices at once.

The faster 4G connection also provides internet support for Cadillac’s CUE infotainment system, which will now feature CUE Collection, a new in-car app marketplace that will be standard on 2015 Cadillac vehicles equipped with CUE. It is accessible through an icon on the car’s touch screen, and can download, organize, update or delete downloaded apps. Cadillac says apps which will be available at launch include iHeartRadio, The Weather Channel, NPR and Slacker Radio.

Cadillac’s CUE system also features new, enhanced capabilities, like the Text-To-Voice feature, which can read text messages aloud through the car’s audio system when connected to Bluetooth. Users can also program preset messages into CUE when parked, which the system will automatically reply with when you are busy driving. The system also sees the addition of Siri Eyes Free for iPhone users, which allows occupants to connect their iPhone to CUE and use the voice activation button on the steering wheel to begin and end voice-controlled sessions with Siri.

Cadillac CUE is available as an option on 2015 ATS Coupe base models and is standard on Luxury, Performance and Premium versions of the car. Meanwhile, OnStar 4G LTE and CUE Collection will become available on the entire Cadillac model lineup by the second half of this year. Pricing is yet to be announced.