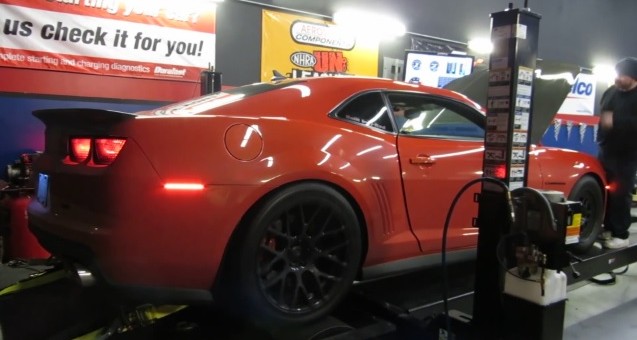 Normally when tuning a car to reach high triple-digit power numbers, the builder will at the very least replace the pistons and rods to ensure reliability. Maybe no one told this to Jaime Rodriguez, or maybe he just doesn’t care, because the Camaro5 user built his 2010 Camaro SS up past 900 horsepower on a completely stock bottom end.

To help achieve these ludicrous power numbers, Rodriguez installed Manley pushrods and valve springs, a Night Fury cam, an LPE fuel pump system, Kooks long tube headers, a Cold Fusion 35 shot of nitrous and an East Coast Supercharging 1500 base kit with a 3.33-inch pulley, to name a few of the parts on the very long list.

So that’s a stock LS3 block with stock pistons, rods and crankshaft which is making over 900 horsepower at the wheels.  What’s more, the car’s transmission is mostly stock save for a twin-disc clutch and a Hurst shifter.

For those of you doubting this Camaro’s reliability, Rodriguez says he frequently drives it to and from the drag strip, where his best pass was 10.94 quarter mile at 130 mph, although he admits to braking the car’s axle one time.

Check out the full build thread of the car here and don’t forget to watch Rodriguez’s 900-horsepower dyno pull in the video below.