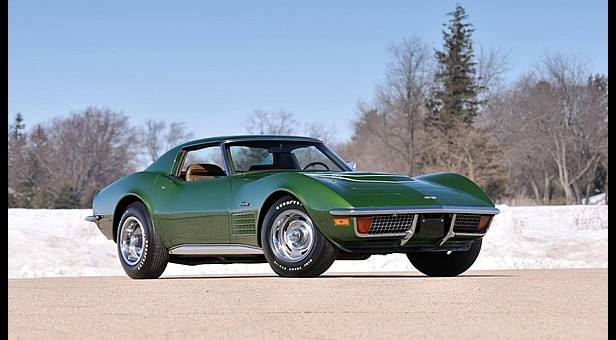 In Corvette lore, we have a Z06 here, a L72 there, and a L88 all over. But what is the ZR1? Yes, a four-valve small-block from 20+ years ago may pop into your head, but the original ZR1 was a 1970 LT1 Corvette equipped with a road-racing package. This “Special Purpose Engine Package” was available through 1972, with only 53 built in total. You’ll have your opportunity to buy one of these thoroughbreds at Mecum’s Houston auction on April 2014.

When the LT1 was introduced in 1970, it was the spiritual successor to the 1968 L79 327. Now, with a few cubic inches more but with all the super special hi-po equipment intact, it was perhaps Chevrolet’s greatest small-block ever. With 370 horsepower, it also was Chevrolet’s most powerful since the 1965 Fuelie.

For $1010.05, a buyer received much of the hardware that was included in the 1969 L88 427 but with the fleet handling prowess of a high-performance small-block – stuff like M22 “Rockcrusher” 4-speed, J56 heavy-duty power brakes, transistorized ignition, aluminum radiator with expansion tank, and special suspension with front and rear stabilizer bars. Radio and power steering were not available, nor were any special trim or creature comforts.

Starting in 1971, all GM motors had lowered compression to meet upcoming government regulations for unleaded fuel, so the LT1 was downgraded to 330 horsepower. In 1972, little power was lost with the added emissions plumbing but the industry started to rate horsepower in net, not gross, terms, so horsepower for the LT1 fell to 255. In comparison, Chevrolet’s LS5 454 big-block was 270, so that small-block certainly packed a wallop.

This 1972 ZR1 is painted Elkhart Green with a Saddle leather interior. Aside of the ZR1 package, it is equipped with 4.11 gears, tilt/telescope steering wheel, Rally wheels, F70x15 tires, and tinted glass. Notable is that it’s A.I.R. emissions is intact, and it is documented with two tank stickers, ownership history, and National Corvette Restorers Society shipping data report. With only 16,300 miles on the odometer, a driver it’s not, but it certainly is perhaps the last great Corvette of the era. And with only 20 built for 1972, it’s among the rarest.