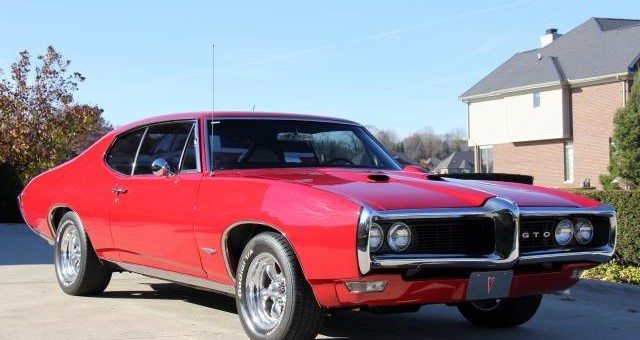 Sure, this is GM Authority, but unforeseen circumstances have eliminated Pontiac from our daily coverage. In memory of the brand that launched the muscle car era with the 1964 GTO and finished it with the 1974 Super Duty Firebird, here’s a feature on a pretty neat 1968 GTO we found on eBay. 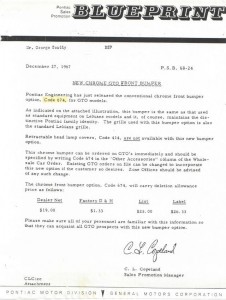 This bulletin shows dealerships announces the chrome bumper option for the GTO.

Nineteen sixty-eight was the year for many changes for the Pontiac GTO. It was the first for a new-generation body where the greenhouse was integrated with the body, while continuing to exploit the Coke-bottle rear fenders that made Pontiac famous just a few years before. Under the hood were mostly carry-over engines, although the base 400 was up 15 horsepower to 350; the two-barrel 400, 400 HO, and Ram Air motors continued as before, with the latter being superseded by the Ram Air II in April 1968. But the biggest news for the GTO was the Endura front Bumper, a hard plastic material that was designed to absorb low-speed impacts with no damage. This feature was unique in all the industry, and it likely was the contributing factor for the GTO winning Motor Trend‘s Car of the Year award.

But a little known option for the GTO was the chrome bumper option, code 674. In the case a prospective buyer felt the new body-colored bumper was too out-there, he or she could opt for the LeMans chrome bumper. It’s also been suggested that this option came about because Pontiac was having trouble making the new-fangled bumper fit properly. Whatever the case, the concealed headlights that were a GTO option were not available when the chrome bumper was chosen.

Even though this is a rather unusual and obscure option, over 2,000 GTOs were built with this bumper-delete option. You can imagine owners taking their cars to shows, only for spectators to remark, “That ain’t a GTO!” but when you look at this 1968 GTO on eBay, it’s all GTO in spite of the bumper. With the base 400 and optional M20 wide-ratio four speed, it’s equipped like many of the 87,000+ that were built in 1968, although this one has been modified with a 455 and several items that aren’t for the GTO purist. But as an example of an Endura-delete GTO, it’s just fine by us.