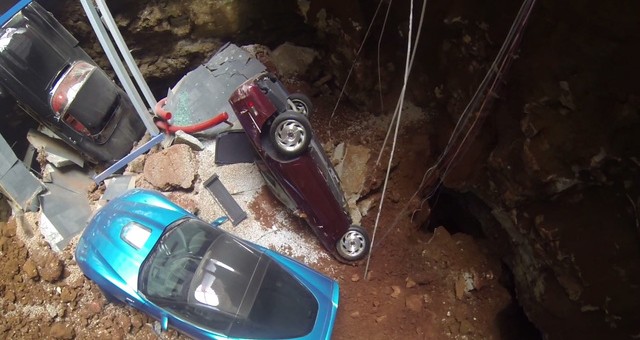 Yesterday’s news of a sinkhole opening in the National Corvette Museum’s Sky Dome room raised many questions. How did they not know the hole was there? Has it always been there? Thankfully, Jalopnik knew this, so they called upon someone who happens to be a car enthusiast as well as a geologist to clear up the grey areas.

Bowling Green, the town where the National Corvette Museum is located, is what geologists know as a “karst area”.  This is an area where water corrodes away at the bedrock beneath the surface until it becomes too thin to support the weight of what is on top of it and it collapses.

When a structure is going to be built in Bowling Green, geologists study the area to make sure the bedrock underneath the surface is structurally sound enough to handle the weight of the building. Jalopnik thinks the sinkhole in the Corvette Museum did not form since the building has been built, but rather was missed when geologists were surveying the land prior to buildings construction.

So while the bedrock around where the sinkhole formed could be competent enough to support the weight of the building, they could have missed the area with weak bedrock where the sinkhole formed by mere feet. This isn’t the first time an incident like this has happened, with the author of Jalopnik’s piece pointing out that a sinkhole was looked over during surveying in the past and ended up swallowing a large new road expansion in Bowling Green.

As far as the future of the Sky Dome is concerned, structural engineers are apparently able to fix the sinkholes, though it is extremely expensive and time consuming. Additionally, they are not able to take away the water that eroded the bedrock and caused the sink in the first place.

Here’s to hoping that the surface underneath and around the Corvette Museum is void of any more sinkholes. We wouldn’t want to see any part of their new racetrack get swallowed up too.