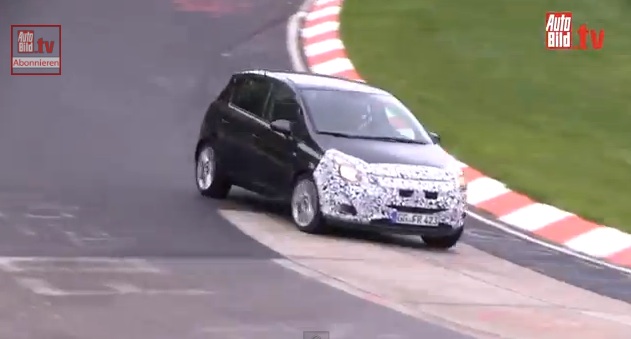 AutoExpress has rendered the upcoming Opel/Vauxhall Corsa, which is expected to retain a new front fascia and undergo an interior overhaul in time for the Paris Motor Show in September.

The aging hatchback has been spied more than once wearing a revised front end similarly styled to Opel’s small city car, the Adam. Despite the styling tweaks, the Corsa will ride on the same platform as before and is expected retain the same styling from the A-pillar backward.

Inside, the new Corsa will use a thick-brimmed steering wheel, glossy black plastics and a soft touch dashboard, much like in the Adam.

Under the hood will be Opel’s new 113 horsepower, 1.0 liter three-cylinder gasoline engine, which AE says will be mated to a new, six-speed manual transmission. Opel’s 200 horsepower, 1.6 liter four-cylinder turbocharged engine, which debuted in the Cascada convertible last year, is expected to make an appearance in an upcoming high performance version of the Corsa.

AE says Opel’s 1.6 liter CDTi diesel might also be offered with the new Corsa. This engine will comply with Euro 6 emissions standards and emit just 100g/km of C02.