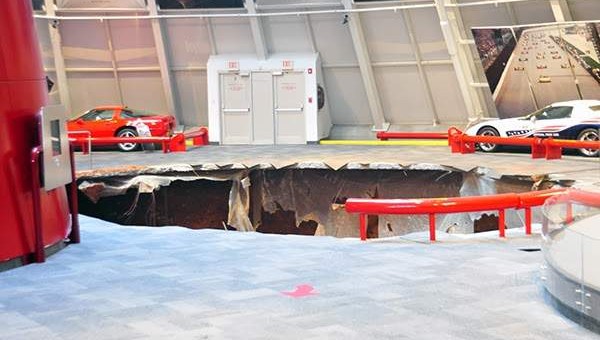 A 40-foot sinkhole opened up in the National Corvette Museum this morning, swallowing eight priceless Corvettes in the process.

The sinkhole began to form at about 5:30 a.m., the Detroit Free Press reports. By 5:44 a.m., the growing hole had set off motion detectors inside the museum. When emergency personnel arrived on the scene, they discovered a hole that was 40 feet wide and between 20 and 30 feet deep.

According to a statement released by the museum, six of the damaged cars were owned by the Corvette Museum while two others were on loan from General Motors.

The sinkhole opened up in the Sky Dome section of the museum, which houses the facility’s “prime cars”.

The safety of the people working on the incident precedes saving any of the cars, the museums executive director, Wendell Strode said.

“Before we do anything, like remove the other cars, we want that assessment so we know if there’s been any structural damage to the Sky Dome,” he said.

Emergency workers did allow the museum to remove a priceless 1983 Corvette since there were no 1983 production Corvettes, making the car the only surviving prototype.

Sink holes are extremely common in the Bowling Green Area, said Jason Polk, a professor of geology and geography at Western Kentucky University. While the cause behind the sink hole at the Corvette Museum is undetermined, sinkholes of this kind are usually caused by underground caves which slowly expand over time until the ground on top gives way.

Polk said it does not look like any other potential sink holes pose threats to other parts of the museum. The nearby Bowling Green Assembly plant, where the Corvette is made, has not been affected by the sinkhole.

The Corvette Museum issued a statement saying the museum will be closed for the rest of the day while a structural engineer assesses the damage and stability of the surrounding areas. A damage estimate has not been released as of this writing.

“We’ll try to get back to business as usual as soon as we can and keep moving forward,” Strode said.