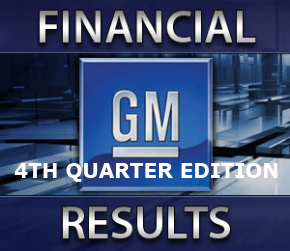 Those special items to impact Q4 2013 net income include a $700 million charge related to the discontinuation of the Chevrolet brand from Europe and a $500 million in asset impairment related to the termination of manufacturing operations in Australia. A favorable tax settlement and a gain on the sale of an equity investment in Ally Financial, along with other smaller items, partially offset these charges.

EBIT-adjusted, which included the impact of restructuring charges of $200 million, was up 37 percent to $1.9 billion.